This artist's concept is of a new weather satellite - but not the type of spacecraft that warns us of coming winds and rain. 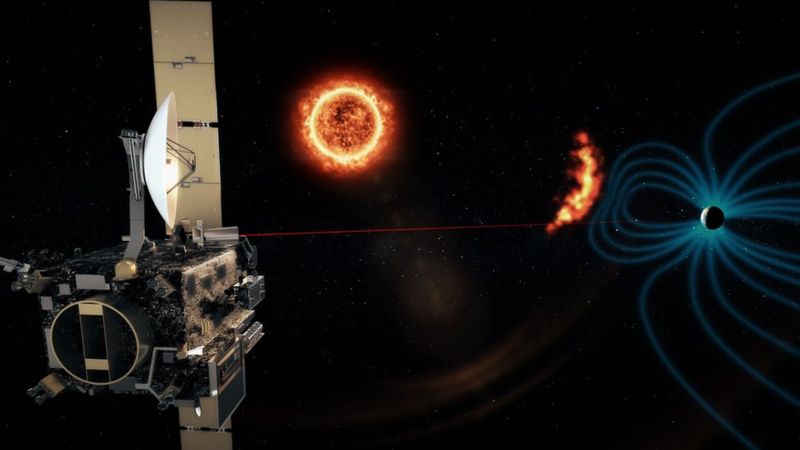 It's a mission that would monitor the Sun for the type of energetic outbursts that can interfere with everyday activities on Earth.

These powerful eruptions of particles and magnetic fields can degrade communications and even knock over power grids.

The Lagrange satellite would see this "space weather" as it develops, alerting us to the impending disruption.

The pictured concept has been produced by the UK arm of European aerospace company Airbus, which has just finished its initial assessment of how to construct the mission.

Airbus is one of four groups that were asked to work through ideas by the European Space Agency (Esa).

Member state delegations to Esa's big ministerial meeting in late November will now be asked to fund the next phase of the project.

The name Lagrange reflects the position the satellite would take up in space. The plan is to go to a gravitational "sweetspot" just behind the Earth in its orbit around the Sun known as "Lagrangian Point 5".

Spacecraft that are sited there do not have to use so much fuel to maintain station - but there is an even bigger operational rationale to use this location: it is the perfect spot to see that part of the Sun which is about to rotate into view of the Earth.

In other words, the Lagrange satellite would get a preview of emerging storm systems. And being off to one side would also allow it to estimate how quickly any big outburst might arrive at Earth.

Space weather is an issue of growing concern. There's a recognition that society's heavy reliance on technology has probably made it more vulnerable to the type of interference solar storms can initiate.

If a major outburst knocked satellite navigation systems offline, for example - a not-inconceivable scenario - the economic losses would run in to the billions.

The panel wants to see: more research on the topic; improvements in the models used for forecasting; a greater awareness of the risks; better coordination among everyone's efforts across Europe; and, obviously, a much enhanced system of observations.

This is where missions like Lagrange come in. And it's hoped the European satellite would have an American partner in space. This would take up a position directly between the Earth and the Sun, at Lagrangian Point 1.

Last month, the UK government, which has supported the Lagrange feasibility studies through its Esa membership, put a further £20m towards space weather science.

This money will go to research that can, ultimately, "improve systems at the Met Office Space Weather Operations Centre". The Met Office works closely with US colleagues in issuing forecasts and warnings to users. These users include satellite operators. The alerts will tell them if they need to turn their spacecraft to shield sensitive electronics from the full force of a storm.