A giant parrot that roamed New Zealand about 19 million years ago had a height of 1m - roughly half the average height of a human, a new study has found. 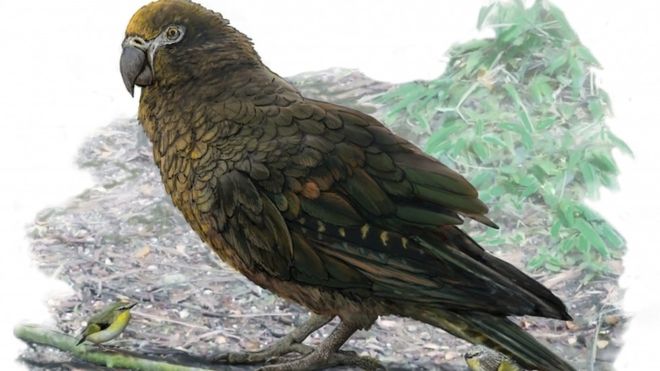 The remains of the parrot were found near St Bathans in New Zealand's southern Otago region.

Given its size, the parrot is believed to have been flightless and carnivorous, unlike most birds today.

A study of the bird was published on Tuesday in the journal Biology Letters.

Weighing just over one stone (7kg), the bird would have been two times heavier than the kākāpo, previously the largest known parrot.

"There are no other giant parrots in the world," Professor Trevor Worthy, a palaeontologist at Flinders University in Australia and lead author of the study, told the BBC. "Finding one is very significant."

Palaeontologists have dubbed the new species Heracles inexpectatus in recognition of its unusual size and strength.

The bones - initially believed to belong to an eagle or duck - were kept in storage for 11 years until earlier this year, when a team of palaeontologists reanalysed them.

Prof Worthy said one of his students came across the parrot's bones by chance in his laboratory during a research project.

The parrot's beak would have been so big, Mike Archer of the University of NSW Palaeontology said, it "could crack wide open anything it fancied".

The professor told AFP news agency the parrot "may well have dined on more than conventional parrot foods, perhaps even other parrots".

However, because the parrot had no predators, it is unlikely that it was aggressive, Prof Worthy told the BBC.

"It probably sat on the ground, walked around and ate seeds and nuts, mostly," he said.

Paul Scofield, the senior curator of natural history at Canterbury Museum, told AFP that researchers were "putting our money on it being flightless".

The discovery of large birds is not uncommon in New Zealand, once home to the moa, a now-extinct species whose height reached an estimated 3.6m (11ft 8in).

St Bathans, where the giant parrot's leg bones were excavated, is an area known for its abundance of fossils from the Miocene epoch, which extended from 23 million to 5.3 million years ago.

"But until now, no-one has ever found an extinct giant parrot - anywhere," Prof Worthy told AFP.

"We have been excavating these fossil deposits for 20 years, and each year reveals new birds and other animals... no doubt there are many more unexpected species yet to be discovered in this most interesting deposit."