Rats sold in the markets and restaurants of Southeast Asia harbour multiple coronaviruses, a study shows. 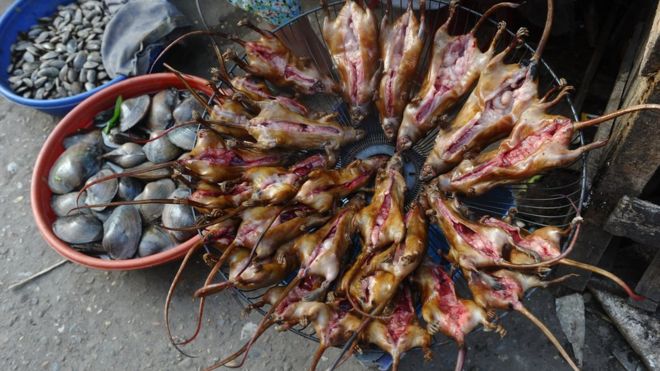 The proportion of positives increased as live animals were moved from "field to fork", suggesting they were picking up viruses in the process.

The strains detected are different from Covid-19 and are not thought to be dangerous to human health.

But scientists have long warned that the wildlife trade can be an incubator for disease.

The mixing of multiple coronaviruses, and their apparent amplification along the supply chain into restaurants, suggests "maximal risk for end consumers", said a team of researchers from the US and Vietnam.

The origins of the current pandemic are thought to lie in the wildlife trade, with the disease emerging in bats and jumping to people via another, as yet unidentified, species.

The new findings, regarded as preliminary, relate to rats, but may apply to other wildlife, such as civets and pangolins, which are also collected, transported and confined in large numbers.

"While these aren't dangerous viruses they offer information on how viruses can be amplified under these conditions," said Sarah Olsen of New York-based conservation group, WCS, which led the study alongside experts in Vietnam.

Co-researcher, Amanda Fine, also of WCS, added: "Wildlife supply chains, and the conditions the animals experience while in the supply chain, appear to greatly amplify the prevalence of coronaviruses."

Rats are a common food source in Vietnam, where they are captured in rice fields and transported to markets and restaurants, to be butchered as a fresh source of meat. The rodents are also raised in wildlife farms, along with other animals such as porcupines.

Six known coronaviruses were detected in samples taken at 70 sites in Vietnam in 2013 and 2014. High proportions of positive samples were found in field rats destined for human consumption. The proportion of positives significantly increased along the supply chain:

Detection rates in rodent populations in their "natural" habitat are closer to 0-2%, said the researchers.

The study was carried out with animal health experts in Vietnam, which is considering a ban on wildlife trade and consumption. It appears in the pre-print journal bioRxiv in advance of peer-review.

Conservation experts say the coronavirus pandemic is a watershed moment for curbing the global wildlife trade. Wet markets can be "time bombs" for epidemics, they warn, bringing together different species which can shed and spread virus.

China banned the farming and consumption of live wildlife in the wake of the outbreak, however loopholes remain, such as the trade in wild animals for medicine, pets and scientific research.