More than 150,000 people are homeless in California. 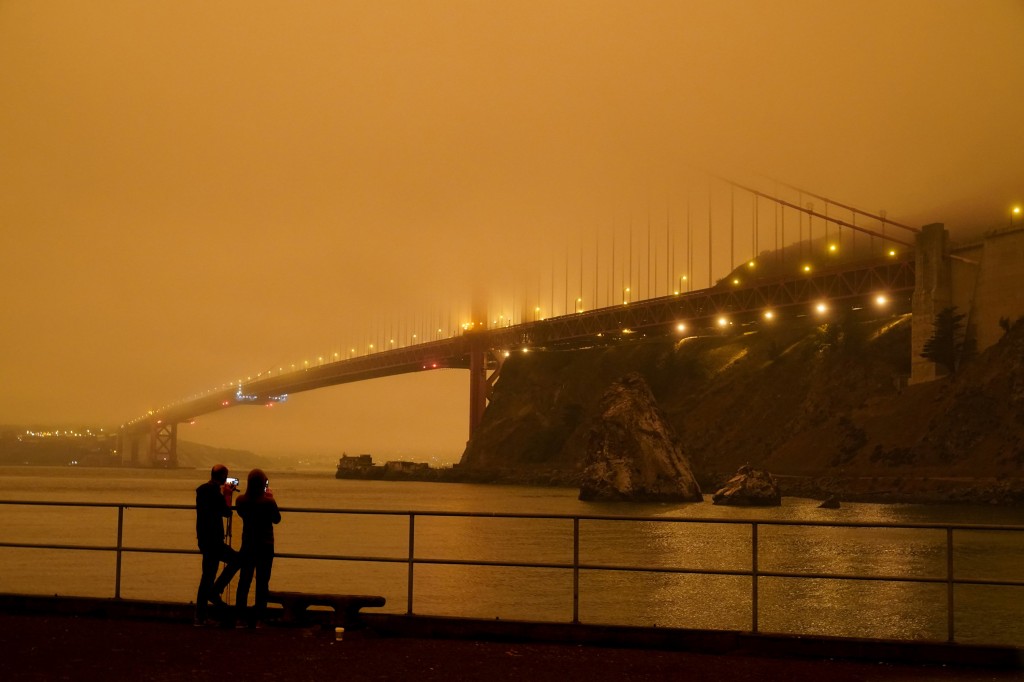 The orange and red skies across the west coast of the United States on Wednesday morning drew comparisons to Mars and the sci-fi movie Blade Runner 2049.

The eerie skies were a result of the wildfires that have been raging in multiple states including California, Oregon, and Washington. As of Friday, the Western states are battling more than 100 fires that have killed at least 15 people, displaced hundreds of thousands, destroyed entire towns, and burned more than 4.3 million acres — an area roughly the size of New Jersey

A less visible danger caused by the wildfires is the impact of the smoke and ash on people’s respiratory health, especially for those who have to spend time outdoors due to their working or living conditions. In California, more than 150,000 people are currently experiencing homelessness, two-thirds of whom are without shelter.

For those without shelter, the smoky skies and harmful air quality are particularly concerning, especially at a time when COVID-19 is forcing the entire nation to stay at home and get fresh air outdoors. In the case of people experiencing homelessness, the former isn’t an option, and the latter is now a health hazard.

Homelessness is closely connected to poorer physical and mental health, according to the Centers for Disease Control and Prevention (CDC). The rates of conditions such as diabetes, heart disease, and HIV/AIDS are three to six times higher among the homeless population than the general population. Many of the health problems among people experiencing homelessness result from barriers to health care, food insecurity, and limited access to resources and social services.

The COVID-19 pandemic posed additional challenges to the health of people experiencing homelessness. Not only do they lack care and resources, but also areas where they can shelter-in-place and social distance.

As a result, many homeless shelters across the US saw outbreaks. A CDC report on 19 homeless shelters in four US cities found that a quarter of residents tested positive in less than a month. In San Francisco, an outbreak at a homeless shelter in April led to 100 people testing positive, including 10 staff members.

Now, as cities on the West Coast face unhealthy air quality, people experiencing homelessness are once again at a higher risk of illness than the rest of the population.

"What we're seeing is that for people who have asthma, chronic obstructive pulmonary disease, or heart disease, which is very common in homeless populations, is that the smoke worsens those symptoms or those problems and makes it harder to breathe," she added.

In response to these compounding issues, some local fire departments in Los Angeles have been passing out masks to protect homeless people against the smoke and COVID-19, according to the Guardian. But homeless communities in other areas, such as Northern California’s Sonoma County, have been left to fend for themselves or to depend on volunteers to distribute protective gear.

Many shelters in the Bay Area have also been forced to close or have limited capacity due to COVID-19, restricting the amount of people who can receive shelter in a city of nearly 30,000 people experiencing homelessness.

In Salem, Oregon, the ARCHES Project has opened up its day room for people who need to escape the smoke from the 130,000-plus acre Santiam Fire/Beachie Creek Fire. Homelessness providers in the city are also attempting to reopen a hotel program and connect with local churches to provide shelter for evacuees and individuals experiencing homelessness.

Although the orange and red hues have begun to fade into grey, the air quality remains unhealthy and even hazardous in California’s Bay Area and parts of Oregon. The poor air quality is expected to persist throughout the weekend as the wildfire season rages.

China aims for carbon neutrality by 2060