Protesters put pressure on the government to address gender-based violence and the pay gap. 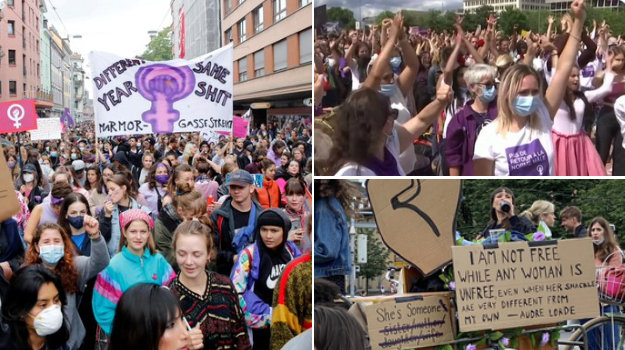 Thousands of women across Switzerland expressed the frustrations many feel daily due to gender inequality in the workplace and at home at demonstrations across the country Sunday.

Marchers screamed in unison at 3:24 p.m. — the time of day when women start working for free due to the gender pay gap, Reuters reported. They also addressed street harassment and gender-based violence, and called for their nation, one of the world’s wealthiest countries, to do better.

In addition to the scream, protesters joined a flash mob and observed a minute of silence for women killed by intimate partner violence.

The demonstrations commemorated the one-year anniversary of the women’s strike known as Frauenstreik, organized by unions to draw attention to Switzerland’s poor gender equality track record. The strike prompted the Swiss government to require companies with more than 100 employees to conduct analyses of pay gaps between men and women.

Nearly 500,000 women first protested against gender inequality in the country at a women’s strike in 1991. Four years later, the government passed the Gender Equality Act to protect women in the workplace.

"It’s shocking to think that women in Switzerland were not given the right to vote until 1971," Tara Carey, senior media and content manager at the organization Equality Now, told Global Citizen. "Since then, there have been various legal advances towards gender equality, and whilst Switzerland is doing better than many countries when it comes to gender equality, there remains a great deal of room for improvement."

Up until 1985, women in Switzerland could not work or open up a bank account without their husband’s consent. Women in the country still face workplace discrimination, struggle to maintain job security, have limited opportunities to move up, and are not protected against harassment and abuse at work, rights activists say, according to CNN.

Switzerland also offers the shortest paid maternity leave in Europe, according to a 2019 UNICEF report, Carey pointed out.

Safety is another concern for Swiss women. One in 5 women is a victim of sexual violence in Switzerland, according to a survey by the organization Amnesty International.

"Sexual violence and underreporting of abuse remains common, and Swiss law does not define rape on the basis of lack of consent," Carey said.

While Switzerland ranks second on the United Nations’ gender equality index — which measures gender disparities around the world — Swiss women currently earn around 20% less than men. Government data has shown the gender gap has worsened since 2000.

The COVID-19 pandemic has highlighted the lack of gender equality even further, according to the Swiss Trade Union Federation, one of the organizations behind Sunday’s protest.

"COVID-19 has exposed and exacerbated structural gender inequalities that disadvantage women and across all nations, and Switzerland is no exception," Carey said.

Globally, women carry out at least two and a half times more unpaid household and care work than men, and are more likely to hold informal jobs that lack protection. The coronavirus crisis has exposed the unsafe work conditions women are forced to endure, and the gender imbalance of unpaid domestic work.

The United Nations urges Switzerland to develop a comprehensive gender strategy to break down the structural barriers preventing women from excelling as much as men.