The UK approved the export of more than 32,000 tonnes of banned pesticides in 2018, according to environmental campaign group Greenpeace. 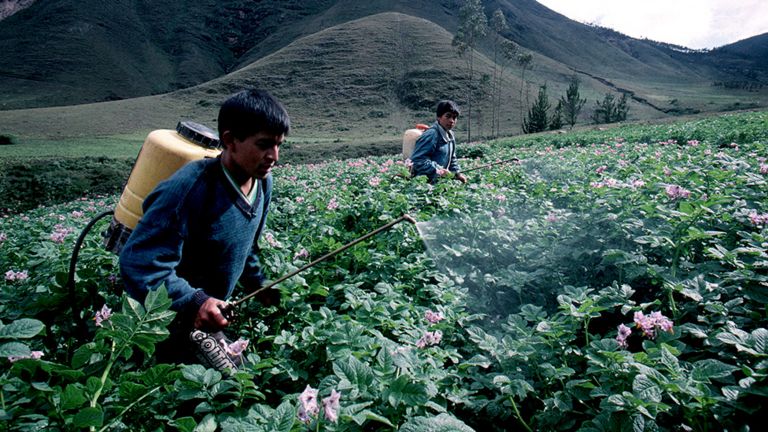 The shipments were among 81,615 tonnes of banned "crop protection products" planned by British and other European companies that year.

Under EU law, firms are still permitted to make and export chemicals whose use is restricted within the bloc itself.

Greenpeace used freedom of information requests to unearth the data.

This was contained in hundreds of documents.

Greenpeace described the trade as "exploitative hypocrisy" and demanded the UK government put an end to it.

The campaign group's chief scientist, Doug Parr, said the UK should stop the manufacture and export of all banned pesticides and "pressure the EU to do the same and close this loophole for good".

Some critics in importing nations claimed the practice was a "double standard" that placed a lower value on lives and ecosystems in poorer countries.

"Even though the climate is different, our bodies are made from the same matter," said Alan Tygel, spokesperson for the Permanent Campaign Against Pesticides and for Life, a Brazilian umbrella group of social movements and NGOs.

The majority of the exports notified from the UK (28,185 tonnes) were mixtures containing paraquat, a weedkiller that has been banned in the EU since 2007.

Paraquat is manufactured in Huddersfield by the biotech company Syngenta.

It is a very effective weedkiller that is widely used around the world but in concentrated doses can be very toxic.

It is often used in suicides, and scientists are investigating evidence of links between repeated exposure to the chemical and Parkinson's disease.

Syngenta told the BBC it followed the law in every country in which it operates.

It said different parts of the world grew different crops in different climates with different weeds and other pests, and therefore needed different chemicals.

"It is very common that crop protection chemicals produced in countries where we have manufacturing plants are not necessarily registered or sold there," it said.

Almost half of the UK's 2018 paraquat shipments (14,000 tonnes) were destined for the United States, where Syngenta faces lawsuits from farmers who allege the weedkiller gave them Parkinson's disease.

But exports were also planned to low- and middle-income nations including Brazil, Mexico, India, Colombia, Ecuador, and South Africa, where protective equipment is less commonly used and government regulation on the use of dangerous chemicals is not so rigorous.