An almost perfectly preserved whale skeleton thought to be between 3,000 and 5,000 years old has been discovered in Thailand. 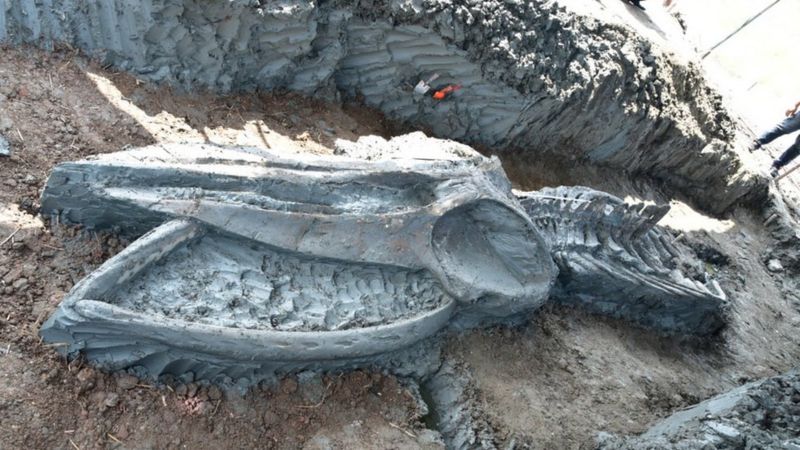 The bones were found in early November some 12km (7.5 miles) off the coast just to the west of Bangkok.

The 12m (39ft) long skeleton is thought to be that of a Bryde's whale.

Experts hope the find might provide "a window into the past," especially for research on sea levels and biodiversity.

The partially fossilised bones are "a rare find," mammal researcher Marcus Chua of the National University of Singapore told the BBC.

"There are few whale subfossils in Asia," he said, and even fewer ones are "in such good condition".

According to the politician, more than 80% of the skeleton has so far been recovered, including vertebrae, ribs, fins and one shoulder blade.

The skeleton's head alone is estimated to be about 3m in length.

Mr Chua says the discovery will allow researchers to find out more about the particular species in the past, whether there were any differences compared to today's Bryde's whales.

The skeleton will also provide information about the "paleobiological and geological conditions at that time, including sea level estimation, types of sediments, and the contemporary biological communities at that time".

The bones are yet to be carbon-dated to determine their exact age, with the results expected in December.

The gulf of Thailand has an interesting history in the last 10,000 years, the biologist points out, with sea levels possibly up to 4m higher than today and active tectonic activity.

The skeleton was found off the current coastline in Samut Sakhon.

Bryde's whales, which live worldwide in warm temperate and tropical waters, are still found in the waters around Thailand today.