Apple has announced a target of becoming carbon neutral across its entire business and manufacturing supply chain by 2030. 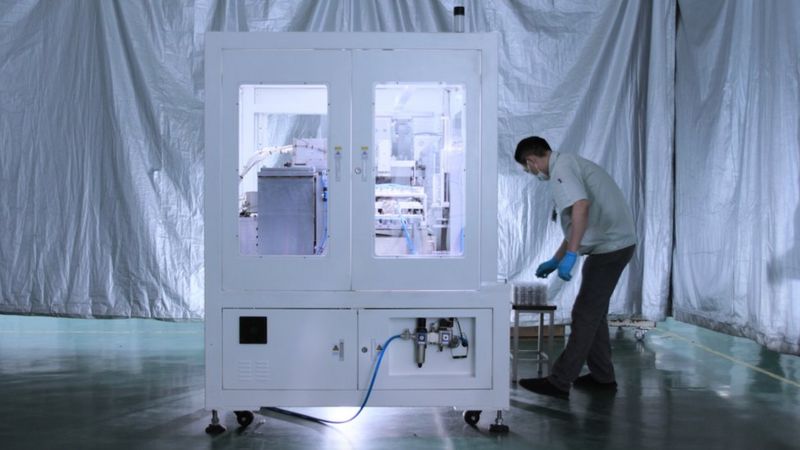 The company says the commitment means its devices will have had "zero climate impact" at point of sale.

It told BBC News any company hoping to become a supplier would have to commit to "be 100% renewable for their Apple production" within 10 years.

It follows climate-focused pledges by other technology giants.

by 2050, to have removed the same amount of carbon as it has ever emitted from the environment

It has also just announced the creation of a consortium involving Nike, Starbucks and Mercedes-Benz among others to share information on carbon-reducing technologies.

Amazon has set a 2040 target to go carbon neutral, reflecting the challenges it faces in converting its home-delivery vehicles to more eco-friendly energy sources.

And Google has said it also intends to extend the carbon-neutral status it claims for its own operations to encompass its supply chain but has yet to set a deadline.

The companies often note their goals are years ahead of the Intergovernmental Panel for Climate Change's 2050 target for net-zero carbon-dioxide emissions, which the IPCC says is necessary to limit global warming.

But the environmental campaign group Greenpeace told BBC News the technology giants were among the most profitable companies in the world and therefore had a responsibility to act quickly.

"I am happy to see that Apple has worked with suppliers to source actual renewable energy and that it has not relied on low-impact solutions like offsetting or renewable energy credits," said Greenpeace USA's senior corporate campaigner, Elizabeth Jardim.

"But I will want to see how the company is further phasing out reliance on fossil fuels throughout its operations on a near-term timeline.

"At present, the company has matched data-centre energy demand with renewables and committed to do the same for its supply chain.

"But this is not the same as phasing out fossil fuel use altogether."

By contrast, she added, Google had committed to power its data centres with renewables around the clock.

Apple acknowledges its plan involves investment in new eco-friendly projects as well as the purchase of green energy offsets to compensate for some continued use of carbon-emitting fuels.

It intends to reduce emissions from its current carbon footprint by a further 75% before the 2030 deadline.

But it points to the fact some energy use - for example liquid fuel used in long-haul aviation - cannot be easily swapped for a greener alternative.

Apple has published a 10-year roadmap detailing some of the actions it plans to take.

These include the use of a new robot, nicknamed Dave, to recover materials from the vibrating Taptic Engine of devices returned for recycling.

The part is used to provide haptic feedback to owners of the company's smartwatches, tablets, smartphones and laptops.

"Once we have the engine removed [by another robot] Daisy, Dave will disassemble the engine itself and remove the rare-earth elements and the tungsten so that they can be reprocessed and put back into supply chains," Apple's environment chief, Lisa Jackson, said.

She said more than 70 of the company's existing suppliers had already committed to use 100% renewable energy for work on its products by 2030.

"Some of the investment we're making is to work with suppliers to convince their own governments to put more clean energy on the grid," Ms Jackson added.

Other efforts announced by Apple include:

increased use of recycled raw materials in its own products

new solar-panel projects in Scandinavia, to power its own data centres

investment in environmental projects, including work to restore mangrove trees and shrubs on Colombia's coastline and woodland-grassland savannahs in Kenya

work on eco-friendly energy projects to benefit local communities, including the installation of rooftop solar panels at a facility for disadvantaged children in the Philippines and the electrification of an off-grid fishing community in Thailand

When a business says it is carbon neutral, it aims to effectively add no carbon to the atmosphere.

It can do this by:

balancing its emissions, for example by removing a tonne of carbon from the atmosphere for every tonne it has produced

offsetting its emissions, for example by investing in projects that reduce emissions elsewhere in the world

not releasing greenhouse gases in the first place, for example by switching to renewable energy sources

Until now, most companies have focused on offsetting emissions to achieve neutrality.

This often involves funding projects in developing economies to reduce carbon emissions there, for example building hydroelectric power plants, encouraging families to stop using wood-based stoves, and helping businesses make use of solar power. These reductions are then deducted from the main company's own output.

The result of this slows carbon emissions rather than reversing them.

To be carbon negative a company must actually remove more carbon from the atmosphere than it emits.

Microsoft has said it will do this using a range of carbon capture and storage technologies.