Scientists at the New England Aquarium’s Anderson Cabot Center for Ocean Life recently published a study that could help researchers learn where protections are needed the most for bowhead whales. 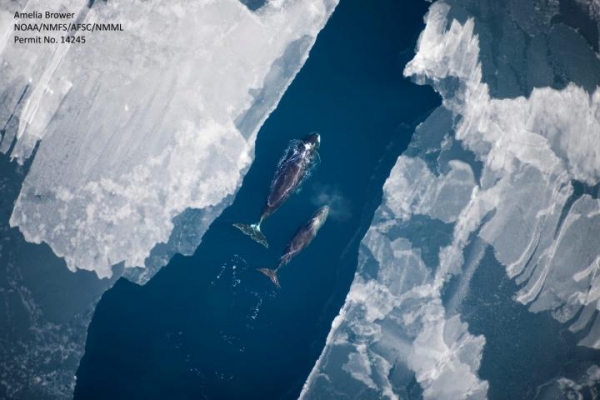 Scientists at the New England Aquarium’s Anderson Cabot Center for Ocean Life recently published a study that could help researchers learn where protections are needed the most for bowhead whales.

Dr. Dan Pendleton and Dr. Jessica Redfern partnered with Dr. Elizabeth Holmes of the National Marine Fisheries Service and Dr. Jinlun Zhang of the University of Washington for the study, which was published in the journal Diversity and Distributions as the cover article. The team used a highly detailed dataset to model suitable habitat for western Arctic bowhead whales in the Beaufort Sea north of Alaska. The model’s map generally matched the location of already documented whale sightings, suggesting that the model can provide useful information for other whale species.

Most species distribution models use data such as ocean depth, temperature, and water chemistry, but with the addition of food—one of the species’ primary drivers for inhabiting an area—the Aquarium scientists were able to improve the ability to make these predictions. The key to this model’s success was calculations that estimate fluctuations in the whales’ prey: zooplankton.

Using prey-centric species distribution models is beneficial for understanding where the whales are now and where they will be in the future. As climate change continues to warm waters and melt sea ice, impacting where the whales’ food source will likely be, this research could guide protection efforts as well as shipping routes and fishing guidelines.