Toxins made by microscopic algae in water caused the previously unexplained deaths of hundreds of elephants in Botswana, wildlife officials say. 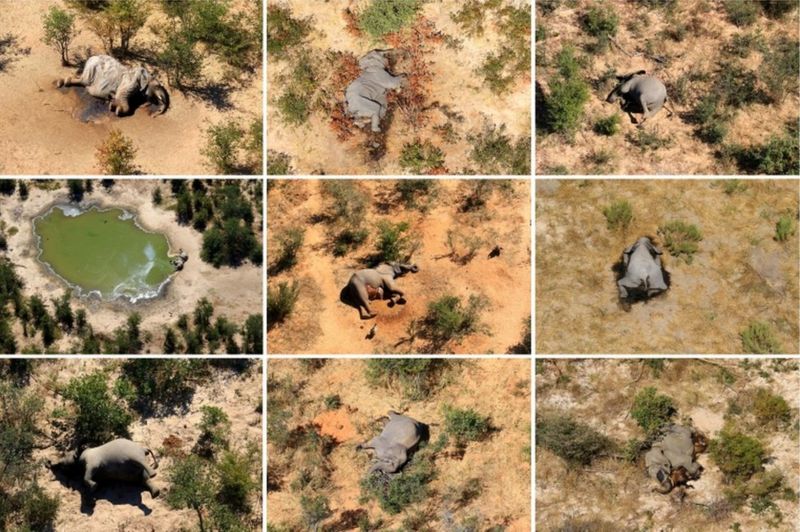 Botswana is home to a third of Africa's declining elephant population.

The alarm was raised when elephant carcasses were spotted in the country's Okavango Delta between May and June.

Officials say a total of 330 elephants are now known to have died from ingesting cyanobacteria. Poaching has been ruled out as a cause of death.

Cyanobacteria is a toxic bacteria which can occur naturally in standing water and sometimes grow into large blooms known as blue-green algae.

Scientists warn that climate change may be making these incidents - known as toxic blooms - more likely, because they favour warm water.

The findings follow months of tests in specialist laboratories in South Africa, Canada, Zimbabwe and the US.

Many of the dead elephants were found near watering holes, but until now the wildlife authorities had doubted that the bacteria were to blame because the blooms appear on the edges of ponds and elephants tend to drink from the middle.

"Our latest tests have detected cyanobacterial neurotoxins to be the cause of deaths. These are bacteria found in water," the Department of Wildlife and National Parks' Principal Veterinary Officer Mmadi Reuben told a press conference on Monday.

The deaths "stopped towards the end of June 2020, coinciding with the drying of [water] pans", AFP quotes him as saying.

Reports in June noted that tusks had not been removed, meaning poaching was not seen as a likely explanation.

Anthrax poisoning has also been ruled out, according to senior wildlife department official Cyril Taolo.

"We have many questions still to be answered such as why the elephants only and why that area only. We have a number of hypotheses we are investigating."

Hundreds of carcasses were spotted with the help of aerial surveys earlier this year.

Dr Niall McCann, of the UK-based charity National Park Rescue, previously told the BBC that local conservationists first alerted the government in early May, after they undertook a flight over the delta.

Twenty-five elephants recently died in a group in neighbouring Zimbabwe. Test samples have been sent to the UK for analysis.

Could cold water hold a clue to a dementia cure?