A spate of deadly bear attacks in Romania has raised fears that the population of Europe's largest protected carnivore is increasing beyond control. 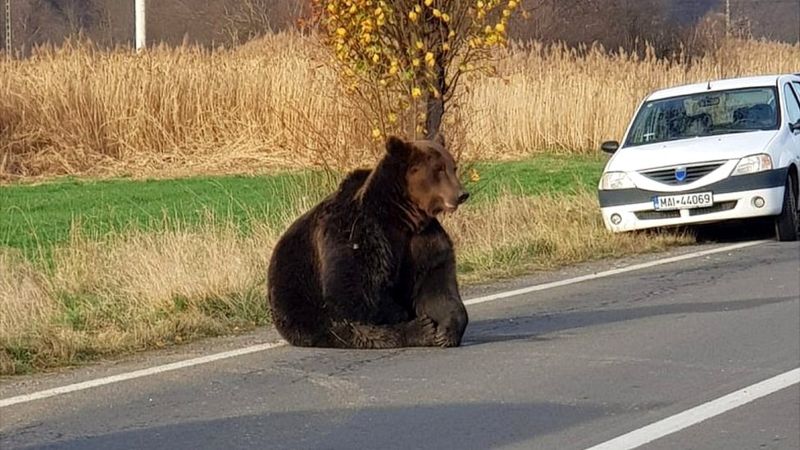 Three men have been killed in little over a month in this East European country that hosts the Continent's biggest number of brown bears.

"The bear population has increased and it needs to be reduced," warns gamekeeper Karoly Pal. The mood is such that some politicians have waged something akin to a war on bears.

Some 6,000 bears live in Romania and incidents involving the animals are becoming increasingly common:

A man aged 46 was fatally attacked in Bacau County, to the east, in late October

The three deaths in the past few weeks bring to at least six the number of fatalities this year, with scores of non-fatal attacks also reported. By comparison, 11 people were killed by bears in Romania between 2000 and 2015.

Warning: This story includes a picture of a dying bear that some readers may find disturbing

Karoly Pal stands in the courtyard of his small farmstead in Neaua, a Hungarian-speaking settlement in the remote reaches of Romania's historical Transylvania region.

"Everywhere I go in this area people are saying that there are too many bears, that you can't produce any crops anymore. People are forced to abandon agriculture and their land - and they are afraid to go outside the villages."

"Everybody in this area is coming to me to claim damages," adds the gamekeeper.

Bears have laid waste to farmers' crops, damaged cars and killed livestock, and have been involved in a recent spate of collisions with cars.

On Saturday evening a large male bear was struck by a car in Harghita County, and it took authorities a reported 19 hours to put it down.

The bear had suffered three broken limbs and lay in agony on the road, guarded by police as people looked on.

Prime Minister Ludovic Orban echoed the anger of many when he complained that authorities had failed to do their duty. He said it had taken more than 15 hours for the environment ministry to receive the request to shoot the bear. It was not until Sunday afternoon that the bear finally died.

Since then another two bears have been hit by cars.

Brown bears can cover huge distances in their quest for food as they consume up to 20,000 calories per day in the warmer months to fatten up for winter. Avoiding human settlements, crops, livestock, and roads along the way is proving to be a challenge for the wild animals.

"One night last week I counted 22 bears [in this area]," says Karoly Pal, walking down a barren dirt road from Neaua to Ghinesti, one of five villages in this remote commune.

Many believe the steep increase in the bear population is down to a 2016 ban on trophy hunting which was widely applauded by environmentalists.

But Romania's official bear population figures could be well off the mark, say experts.

Population estimates have traditionally been carried out by wildlife managers, they point out, citing "out of date" methods and the possible influence of vested interests.

"Since the ban on trophy hunting there was a push by hunters and game managers to report as many damages [claims] as possible," says bear expert Csaba Domokos of the nature conservation NGO Milvus Group.

"There is almost no kind of management in place by authorities. We really have no idea how many bears there are," he says.

Mr Domokos fears that, without an effective management programme, villagers will start to take matters into their own hands.

"The concern is that people will start to use poison and snares," he says, warning of a catastrophic effect on Romania's brown bear population.

The issue has whipped some local media into a frenzy, with news about "problematic" bears.

Mures County MP Marius Pascan has said his area is "under siege" by bears.

"We must react in solidarity before more people are killed," he said in a social media post last week after a mother bear and two cubs were photographed walking down a residential street.

"Bear defenders" were being irresponsible, he complained, and children could be harmed on their way to school.

Romanian lawmakers passed a bill in September that would allow the hunting of brown bears for a five-year period. But the move has angered conservationists, and a petition against the bill has so far gathered more than 100,000 signatures.

On a drizzly November day in the hills surrounding Ghinesti, a short distance from Neaua, 69-year-old shepherd Janos Szabo watches over his large flock, as he has for the past 42 years.

"We have a big problem with bears, they killed four of my sheep this year," he says, taking a sip of homemade plum brandy as his 15-strong pack of gnarly-looking sheepdogs keep guard.

"All the shepherds have problems [with bears]. The situation is worse than ever."

After a long period of fattening up, some of Romania's bears will soon begin their winter sleep, and that could help ease tensions.

Conservationist Csaba Domokos says coexistence is deteriorating fast and a solution has to be found.

"Without social acceptance, the species has no future in Romania," he adds.