A monkey that is new to science has been discovered in the remote forests of Myanmar.

The Popa langur, named after its home on Mount Popa, is critically endangered with numbers down to about 200 individuals. 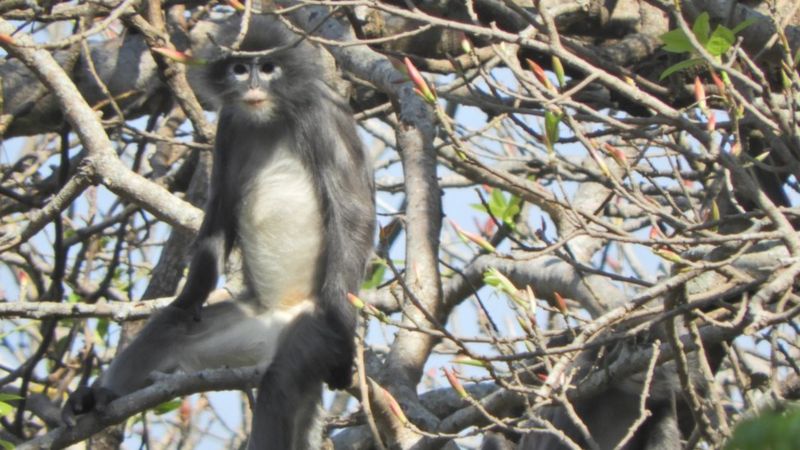 The monkey is known for its white eye patches

Langurs are a group of leaf-eating monkeys that are found across south east Asia.

The newly described animal is known for its distinctive spectacle-like eye patches and greyish-coloured fur.

It is at risk from habitat loss and hunting.

Scientists have long suspected there might be a new species in Myanmar, based on DNA extracted from the droppings of wild monkeys, but evidence has been hard to find.

With very little information to go on, they turned to historical specimens stored in natural history museums in London, Leiden, New York and Singapore.

Early explorers to Burma collected the monkey specimens, which had never been examined in detail.

The researchers extracted DNA and measured physical features such as tail and ear length, which they compared with those of wild populations.

This revealed a new species, the Popa langur, which is found only in patches of forest in the centre of the country. Most live in a wildlife sanctuary park on the slopes of the sacred pilgrimage site of Mount Popa.

Describing the species scientifically will help in its conservation, said Frank Momberg of the conservation group Fauna & Flora International.

He told BBC News: "The Popa langur, just newly described, is already critically endangered and facing extinction so it's absolutely critical to protect the remaining population and to engage with local communities as well as private sector stakeholders to safeguard its future."

There are only 200 to 250 animals of the new species, which live in four isolated populations.

In the last decade or so, Myanmar has opened up to international collaborations with scientists, which has led to the discovery of species new to science, including reptiles, amphibians. But the discovery of a new primate is rare.

Christian Roos of the primate genetics laboratory at the German Primate Centre in Gottingnen said the animals faced threats from habitat loss and hunting.

"Hunting is a big problem but the bigger threat is the habitat is almost gone and it is reduced, fragmented and isolated due to human encroachment, " he said.

The discovery is described in the journal Zoological Research.

Genetic studies revealed that the Popa langur (Trachypithecus popa) separated from other known species around one million years ago.