Four astronauts - three from the US and one from Japan - have launched from Florida on a mission to the International Space Station (ISS). 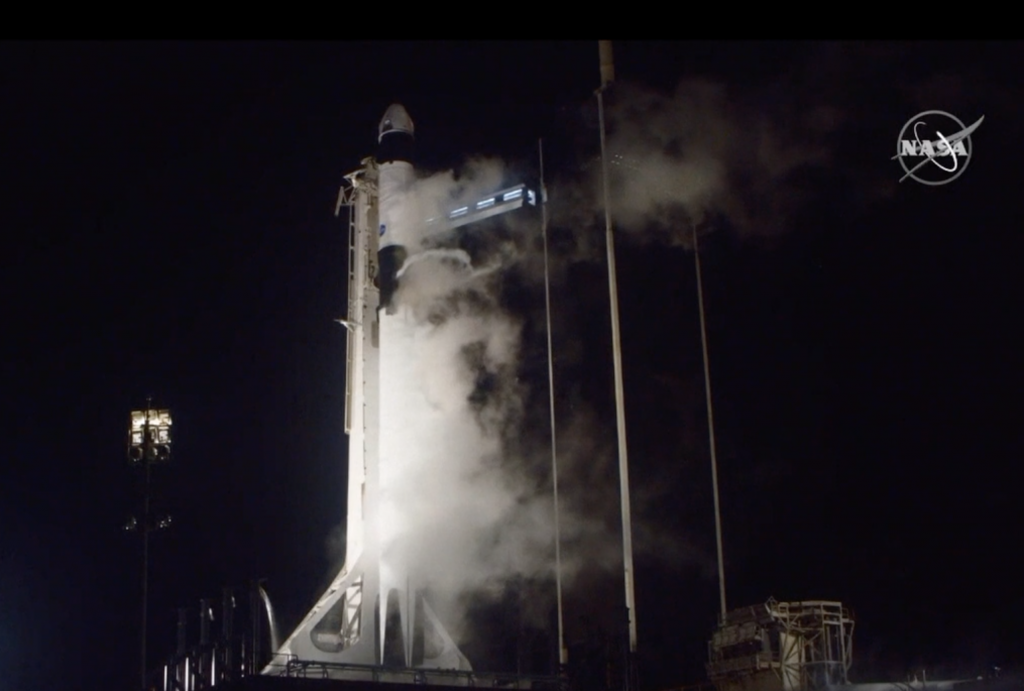 The crew rode to orbit in a rocket and capsule provided by the SpaceX company.

It's only the second time the firm has supplied the service.

The US space agency Nasa has said it is now entering a new era in which routine astronaut journeys to low-Earth orbit are being conducted by commercial providers.

The four individuals making their way up to the ISS are the Americans Michael Hopkins, Victor Glover and Shannon Walker, and the highly experienced Japanese space agency (Jaxa) astronaut Soichi Noguchi.

By participating in this mission, Noguchi becomes only the third person in history to leave Earth in three different types of space vehicle, having previously flown on Soyuz and shuttle hardware.

The crew's Falcon rocket and Dragon capsule left the pad at the Kennedy Space Center at 19:27 local time (00:27 GMT, Monday).

It took 12 minutes for the Falcon to get the Dragon into the right part of the sky and drop it off.

Having seven people on the 410km-high outpost will triple the amount of science that can be performed in its special microgravity environment.

SpaceX has signed contracts with Nasa valued in excess of $3bn (£2.3bn) to develop, test and fly an astronaut taxi service.

As part of this relationship, the company ran a demonstration mission in May in which astronauts Doug Hurley and Bob Behnken were taken to the station and then returned safely to Earth.

The contracted arrangements also call for six "operational", or routine, missions - this flight being the first.

"The big milestone here is that we are now moving away from development and test and into operational flights. And in fact this operational flight was licensed by the Federal Aviation Administration. So this is a truly a commercial launch," commented Nasa Administrator Jim Bridenstine.

Nasa has a similar deal with the Boeing aerospace company, although its service is more than a year behind SpaceX.

The agency says its new model of contracting out transportation to low-Earth orbit is saving billions of dollars in procurement costs.

It intends to use these economies to fund its Moon and Mars ambitions. To that end, Nasa is close to testing the giant new rocket it has commissioned to take astronauts back to the lunar surface, a goal it hopes to attain in 2024, or soon after.

Hopkins, Glover, Walker and Noguchi will stay on the ISS for six months.

Just before they return to Earth, they'll be joined aloft by another SpaceX-launched crew for a brief handover.

Indeed, the coming year is going to be very busy for the Californian service provider with plenty of trips up to the station being made by both its crewed and cargo-only versions of Dragon.

"In the next 15 months, we should be flying roughly seven Dragon missions. And this mission represents the initiation of a Dragon in orbit continuously - knocking on wood - and certainly is really the beginning of a new era in human spaceflight," said SpaceX's Gwynne Shotwell.

The company president was in attendance at Kennedy, carrying out media duties in place of founder and CEO Elon Musk who is said to be suffering a mild case of Covid.

Nasa retired its winged space shuttles in 2011. In the intervening years, it's been buying seats for its astronauts on Russian Soyuz vehicles.

This purchase option will now close in favour of the new American-sourced taxis. But US astronauts will continue to go to the station on Soyuz from time to time - it's just that no money will change hands.

Instead, Russian cosmonauts will get flights in the American capsules in exchange.

The new crew will have at least four spacewalks to perform in their time at the station.

In one of those walks, they will install the first significant UK industrial contribution to the platform.

This is the ColKa communications terminal. Made by MDA UK, the radio equipment will enable astronauts to connect with scientists and family on Earth at home broadband speeds.

ColKa will be fixed to the exterior of Europe's ISS research module, Columbus.

The UK participates on the station through its membership of the European Space Agency, an intergovernmental organisation that is a separate legal entity to the European Union.