Food 'made from air' could compete with soya

Finnish scientists producing a protein "from thin air" say it will compete with soya on price within the decade. 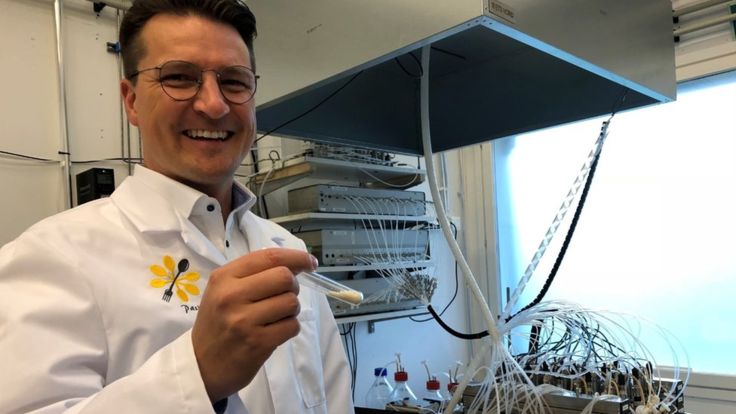 The protein is produced from soil bacteria fed on hydrogen split from water by electricity.

The researchers say if the electricity comes from solar and wind power, the food can be grown with near-zero greenhouse gas emissions.

If their dreams are realised, it could help the world tackle many of the problems associated with farming.

When I visited Solar Foods' pilot plant on the outskirts of Helsinki last year the researchers were raising funds for expansion.

Now they say they have attracted 5.5m euros of investment, and they predict – depending on the price of electricity – that their costs will roughly match those for soya production by the end of the decade - perhaps even by 2025.

I ate a few grains of the precious protein flour - called Solein - and tasted nothing, which is what the scientists have planned.

They want it to be a neutral additive to all sorts of foods.

It could mimic palm oil by reinforcing pies, ice cream, biscuits, pasta, noodles, sauces or bread. The inventors say it can be used as a medium for growing cultured meat or fish.

It could also nourish cattle to save them eating soya raised on rainforest land.

Even if things go according to plan – which, of course, they may not – it will be many years before the protein production is scaled up to meet global demand.

But this is one of many projects looking towards a future of synthesised food.

The firm’s CEO is Pasi Vainikka, who studied at Cranfield University in the UK and is now adjunct professor at Lappeenranta University.

He told me the ideas behind the technology were originally developed for the space industry in the 1960s.

He admits his demonstrator plant is running some months behind time but says it will be ready by 2022. A full investment decision will come in 2023, and if all goes according to plan, the first factory will appear in 2025.

He said: “We are doing pretty well so far. Once we scale the factory from the first one by adding reactors (to ferment protein) and take into account the amazing improvements in other clean technologies like wind and solar power, we think we can compete with soya possibly as early as 2025.”

To make Solein, water is "split", using electrolysis to make hydrogen. The hydrogen, carbon dioxide from the air and minerals are fed to bacteria, which then produce the protein.

A key determinant, he said, would be the price of electricity. The firm anticipates that as more renewables come on-stream, the cost will fall.

The progress of this extraordinary technology has been hailed by the environmental campaigner George Monbiot, who has made a TV documentary, Apocalypse Cow, broadcast on Channel 4 in the UK at 22:00 GMT on Wednesday.

Monbiot is generally pessimistic about the future of the planet, but says Solar Foods has given him hope.

He said: “Food production is ripping the living world apart. Fishing and farming are, by a long way, the greatest cause of extinction and loss of the diversity and abundance of wildlife. Farming is a major cause of climate breakdown.

“But just as hope appeared to be evaporating, ‘farmfree food’ creates astonishing possibilities to save both people and planet.

“By temporarily shifting towards a plant-based diet, we can help buy the time to save species and places.

“But farmfree food offers hope where hope was missing. We will soon be able to feed the world without devouring it.”

Research by the think tank RethinkX, which forecasts the implications of technology-driven disruption of many kinds, suggests that proteins from precision fermentation will be around 10 times cheaper than animal protein by 2035.

It forecasts the result will be the near-complete collapse of the livestock industry - although critics will complain that this doesn’t take into account the ability of meat producers to harness the novel proteins to feed their own stock .

A consortium of leading scientific research and academic institutions has been formed to identify innovative solutions to tackle climate change linked to the agri-food sector.

A paper last year concluded that microbial protein was several times more efficient than soya in terms of land use, and required just a tenth as much water.

Another factor, though, will be cultural. Many people will still want to eat lamb chops that look like lamb chops.

“There is increased momentum and investment round synthetic foods,” he said. But he asked: "Is there really an appetite for their consumption?”