Researchers have found the earliest example of our species (modern humans) outside Africa. 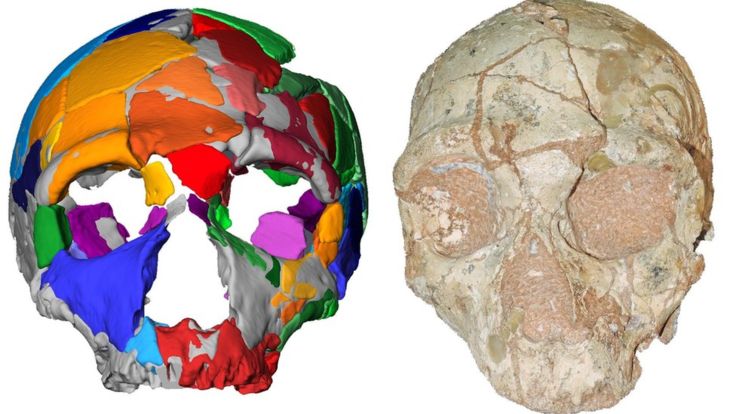 A skull unearthed in Greece has been dated to 210,000 years ago, at a time when Europe was occupied by the Neanderthals.

The sensational discovery adds to evidence of an earlier migration of people from Africa that left no trace in the DNA of people alive today.

The findings are published in the journal Nature.

"It's about five times older than any other evidence of modern humans in Europe. And obviously it's older even than Misliya from Israel (a 150,000-year-old early modern human fossil). The shape of the back of the skull is very modern looking and it's potentially the oldest fossil that shows this modern look to the back of the skull," Prof Chris Stringer, from London's Natural History Museum, told BBC News.

The earliest proposed Homo sapiens, a 300,000-year-old skull from Jebel Irhoud in Morocco, does not show this rounded, high back.

The latest evidence was uncovered at the site of Apidima Cave in Greece in the 1970s. Two skulls were found; one was very distorted and the other incomplete, however, and it took computed tomography scanning and uranium-series dating to unravel their secrets.

The more complete skull appears to be a Neanderthal. But the other shows clear characteristics, such as a rounded back to the skull, diagnostic of modern humans.

"Now our scenario was that there was an early modern group in Greece by 210,000 years ago, perhaps related to comparable populations in the Levant, but it was subsequently replaced by a Neanderthal population (represented by Apidima 2) by about 170,000 years ago," said Prof Stringer.

People living outside Africa today trace their ancestry to a migration that left the continent 60,000 years ago.

As these modern humans expanded across Eurasia, they largely replaced other species they encountered, such as the Neanderthals and Denisovans.

But this wasn't the first migration of modern humans (Homo sapiens) from Africa.

These were viewed as anomalies - a brief foray outside our African homeland that came to very little.

However, in recent years, we've come to understand that our species ranged outside Africa even earlier and further than we'd previously believed.

In the last few years, palaeontologists have discovered modern human fossils from Daoxian and Zhirendong in China dating to between 80,000 and 120,000 years ago.

DNA studies have turned up signs of early interbreeding between African humans and Neanderthals. Evidence from German Neanderthals shows that mixing occurred between 219,000 and 460,000 years ago, although it's not clear if Homo sapiens was involved, or another early African group.

"The movement of the people into Europe, that was actually was a warm stage - Marine Isotope Stage 7 - when it did warm up. So that may have been a reason why the population was able to expand into Europe at that time," said Prof Stringer.

"Soon afterwards, we get a much colder stage starting. Possibly, climate change was a reason why the group died out and Neanderthals re-established themselves."

"If we're right about it, there must be some more evidence of this population and ones like it, still to be discovered."