Researchers have created a new device that lets users feel they are really touching things. 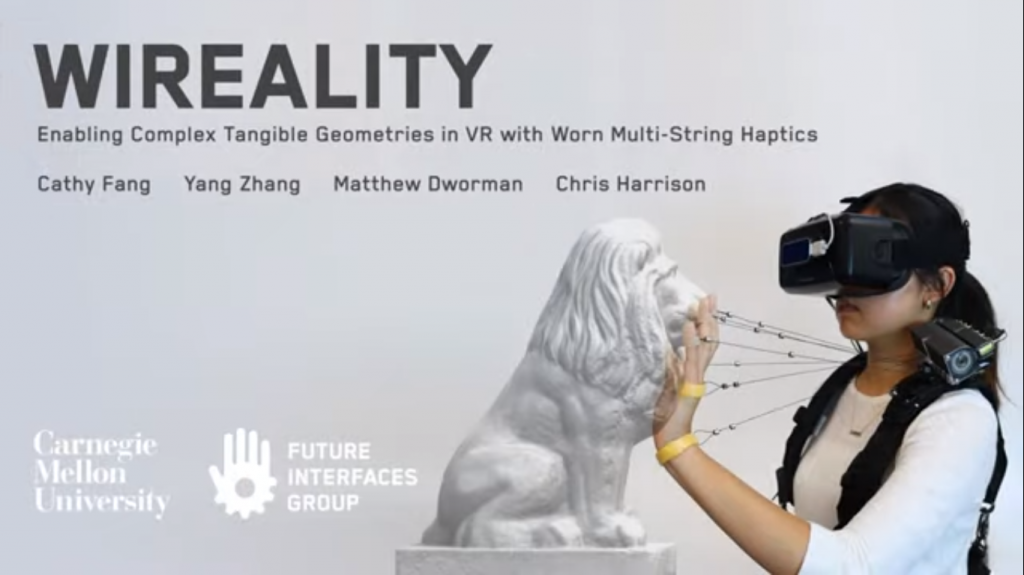 Virtual Reality lets people experience a computer simulated environment and have come a long way since its humble beginnings in games. Today, VR is used to train medical students to become surgeons, help architects design buildings, or train security officers to remotely pilot a drone according to Business Insider. VR can even be used to help treat patients with real world phobias. There is also a myriad of entertainment uses that were unthinkable a short time ago.

The one major drawback is that VR systems only manipulate sight and sound to make users feel that they have been transported to a new environment. Now, thanks to researchers at Carnegie Mellon University in Pittsburgh Pennsylvania an inexpensive, lightweight device that only weighs 10 ounces (.028 kg) has been developed that allows the wearer to feel or touch the VR world.

This haptic feedback device called Wireality, uses seven strings attached to the users hand and fingers to simulate the feel of heavy objects according to a Carnegie Mellon University news release. When the wearer approaches a virtual obstacle like a wall, the string mechanisms allow him or her to feel the object.

Researcher Cathy Fang, who just graduated with a joint degree in mechanical engineering and human-computer interaction said that the shoulder device takes advantage of the strings that are spring loaded to reduce the weight and consume less energy.

Inside Wireality, Free Think said, the strings connect to spring-loaded retractors in a mechanism that allows the strings to be locked or released. This haptic feedback device works together with a hand-tracking sensor that is attached to the VR headset.

If the sensor detects that the wearer’s hand is near an object in the virtual world, the system triggers the strings to lock and release in ways that make the person feel like he or she is actually touching virtual objects like walls, sculptures or even a VR ball.

"I think the experience creates surprises, such as when you interact with a railing and can wrap your fingers around it," Cathy Fang said in the university news release. "It's also fun to explore the feel of irregular objects, such as a statue."

Other researchers have used strings to create haptic feedback but they used motors to control the strings making the device heavy and expensive. The Carnegie Mellon researchers wanted to make a lightweight and affordable device. The team’s research paper was published in the Association for Computing Machinery’s Digital Library.

When the Wireality is mass produced, the researchers estimate that it will cost less than $50 (the TESLASUIT GLOVE that is equipped with haptics sells for $5,000). That’s a huge difference and will make the device and VR very affordable for almost anybody.

The team believes that there will be many practical uses for the device including virtual museum visits or travel, virtual shopping for things like furniture, and for VR games that involve interacting with physical obstacles like a maze. You will actually be able to reach out and virtually touch the future.