Batteries recycled from old LEAFs run the refrigeration equipment in this all-electric truck. 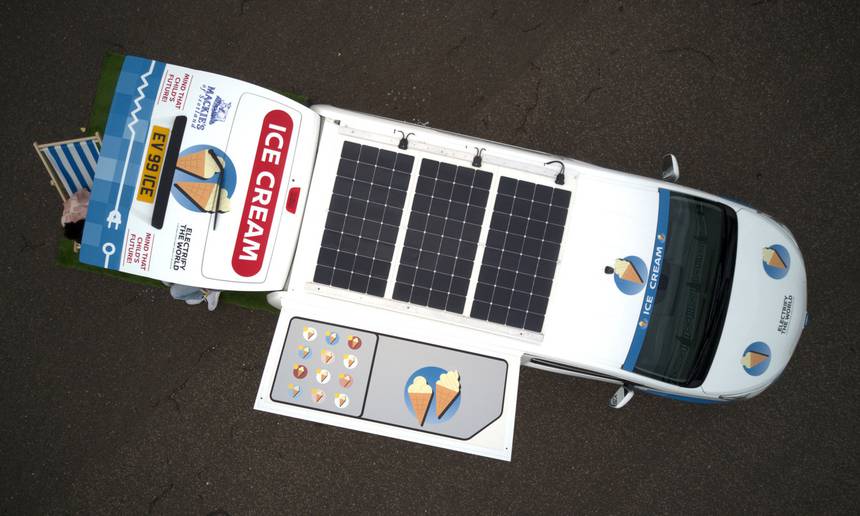 Ice cream in summer can be such a nice treat, but your traditional ice cream truck usually has a diesel engine going all the time to keep the refrigeration equipment running, emitting nitrogen dioxides and particulates.

Now Nissan, working with Scottish ice cream maker Mackie, has introduced a totally electric ice cream truck. Mackies is already powered by renewables; it is “aiming to be Britain’s ‘greenest’ company by becoming self-sufficient in energy and removing any dependence on fossil-fuels. Mackie’s uses solar panels, wind turbines and biomass plants to provide its family-owned farm with clean renewable energy.”

Nissan’s e-NV200 electric light commercial vehicle has a 40kWh battery and a range of 187 miles in the city, but additional power is needed for the refrigeration equipment. Nissan is introducing Energy ROAM battery packs that are made from LI cells recovered from first-generation electric cars like the LEAF, each with a capacity of 700 Wh and a maximum output of a thousand watts. The truck also has solar panels on the roof that can fill up the ROAM batteries in a couple of hours.

Comprising second-life batteries recovered from first-generation Nissan LEAF electric vehicles which have come to the end of their life, Nissan Energy ROAM is the latest example of Nissan’s leadership in sustainable energy technology.

Some cities are considering banning diesel powered ice cream trucks because of their emissions; London is doing it.

Ice cream trucks don’t attract much business in winter; we have a neighbour who just parks one on the street for half the year. But an electric truck can do double duty:

Thanks to the e-NV200’s bi-directional charging capability, owners could even income through the winter – when the van is less frequently used. Through a V2G (Vehicle-to-Grid) charger, the e-NV200’s battery can be used to store surplus energy from the national grid (for example renewable wind and solar energy), and then provide it back to the grid when needed. This technology can help balance out the peaks in national energy demands, as well as providing EV owners with additional revenue from their vehicle when it’s not being driven.

They avoid noise pollution too, by getting rid of the stupid jingle and using What3Words, an app we covered a few years ago at the INDEX Design to Improve Life Awards, to advertise its location.