The case revolved around an injunction granted in the eastern state of Veracruz, which would have effectively decriminalised termination in the first 12 weeks of pregnancy. 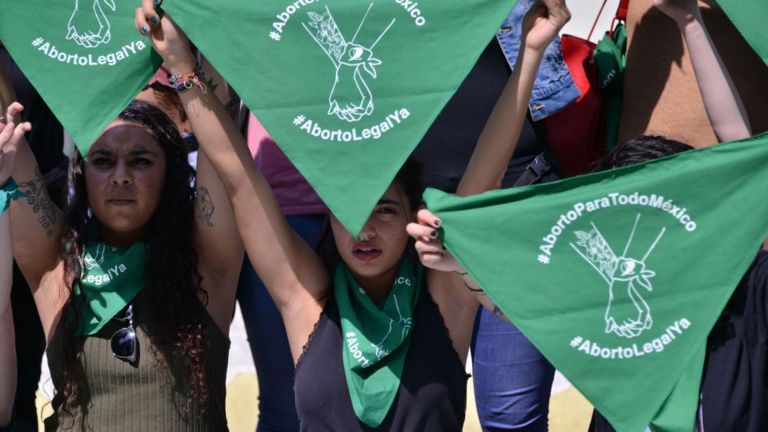 Campaigners hoped the ruling would set a precedent for similar injunctions in other states.

Abortion is legal in just two of Mexico's 32 states.

In an article last week, reproductive rights organisation GIRE said they hoped the court's decision would be a "historic opportunity" for pro-choice campaigners.

But at the hearing today, four out of the Supreme Court's five justices voted against upholding the injunction.

One justice, delivering her verdict, said that upholding the decision would "greatly overstep the constitutional powers of this Supreme Court of Justice of the Nation". Another voted against it because of what she called "a legal technicality".

Last year, a judge in Xalapa, Veracruz, approved an injunction ordering the state's Congress to remove articles 149, 150 and 154 of the local penal code.

The case then went to Mexico's Supreme Court, which needed to decide whether to uphold that judge's decision.

Removing these articles would have decriminalised abortion in the first 12 weeks of pregnancy, allowed terminations for health reasons, and gotten rid of the time limit on abortions in cases of rape.

These changes were first recommended in a wide-ranging report on women's rights, published by the National Commission to Prevent and Eradicate Violence against Women (Conavim) and the National Institute for Women (InMujeres) in 2016.

The state government accepted the proposals and conclusions of the report in March 2017 - but has still not reformed the law.

Although this decision only affects Veracruz for now, campaigners said it could have had repercussions for the rest of the country, too.

In its article last week, GIRE said that if the injunction were to be upheld, Veracruz state congress should "modify its abortion legislation, thereby opening the doors and setting a precedent for other states to modify their local penal codes in the same terms".

Currently, abortion is only legal in two Mexican states - Oaxaca and Mexico City.

While other states allow abortion after rape, there have been high-profile cases of women and girls in this situation being denied terminations.

In 2016, a 13-year-old girl in Sonora state was denied an abortion by health officials after a judge ruled that she was not raped, but was the victim of the lesser crime of "sexual coercion".

The governing Morena party controls most of Mexico's state legislatures, but has been divided on the issue of abortion.

President Andrés Manuel López Obrador has also been accused of inaction on women's rights, including reproductive rights and gender-based violence.

Shortly after a historic protest in March, in which thousands of Mexican women took part in a Day Without Women strike to call attention to these issues, President López Obrador accused "conservatives" of "putting on the mask of feminism and saying, 'we're going to get rid of the government'".

States were first given the right to set their own health policies, including abortion laws, after a 2008 Supreme Court ruling upholding Mexico City's abortion legislation.

In the years that followed, more than half of Mexico's states enacted laws that banned abortion in either all or most circumstances.

This included Veracruz, which enacted a constitutional amendment in 2016 that said life begins at conception.