Crisis affects disproportionately to the poorest neighborhoods. Those who can afford it still have access to seemingly unlimited water. 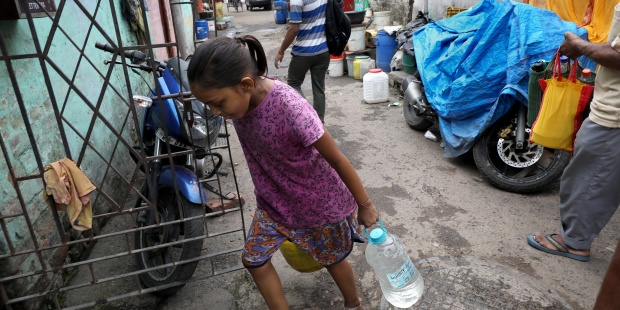 In New Delhi, India’s capital city, where 18.6 million people reside, water has become a scarcity — but not for everyone. The city’s poor are struggling to access water and meet their basic needs, while its rich continue to enjoy a seemingly limitless water supply at low prices, Reuters reported.

In central Delhi, the poshest area of the city, where most government buildings are located, residents pay as little as $10 to $15 for a month’s supply of piped water. But in the city’s unauthorized dwellings, slums, and suburban areas, rows of people — mostly women carrying children in one arm and containers in the other — are seen lining up to fetch water from tankers with limited supply.

And, in a country where the population is growing at an unprecedented rate and income disparity remains unequivocally high, the fight to access limited resources like water seems never ending.

A year ago, Amar Nath Shukla, a telecom sales representative who lives in Sangham Vihar, South Delhi, could purchase two containers of water for 500 rupees, but he was forced to cut his usage after the prices increased by 40%, he told Reuters.

Now, Shukla pays 700 rupees ($10) for a small tanker to bring 2,000 liters of water every week to support his family, including his wife and three school-age children.

“Why should a densely populated settlement get so little of water and why should the sparsely-populated central district of New Delhi receive so much of extra supply?” said Shukla.

But the disparity in access to water isn’t limited to New Delhi. Other major Indian cities like Hyderabad, Bangalore, and Chennai are facing similar water crises.

Quenching the thirst of 1.3 billion people is becoming especially difficult as wells are drying out and land is burning up amidst staggering heat waves.

Temperatures have been soaring in India, where severe heat waves have caused 36 deaths this year alone. New Delhi, recorded its highest temperature ever — 48 degrees Celsius — last month. The city of Churu, in the neighboring state of Rajasthan, experienced a high of 50.8 degrees Celsius in the same week, making it one of the hottest places in the world.

India’s water crisis is likely to worsen in the coming years, experts say. By 2020, 21 Indian cities will run out of groundwater, according to a new report from government think tank NITI Aayog. The report called for “urgent and improved” management of water resources to mitigate disaster.

The local New Delhi government has maintained that its water treatment plants are running at full capacity, blaming the water shortage on less supply, and refusing to address the disparity in neighborhood supplies.

"At the time the country is facing acute water crisis and all reservoirs have dried up, Delhi is supplying more water than its capacity," Delhi Jal Board (DJB), Vice Chairman Dinesh Mohaniya, told the Business Standard.

Despite this deficit, some people — largely depending on the income level of their neighborhood — receive more than their fair share of water, while others struggle to get by. Delhi’s main government district and army cantonment areas receive about 375 liters of water per person each day, but residents of Sangam Vihar, an unauthorized urban settlement, receive only 40 liters of water per day.

Because the main water supply comes from boreholes and tankers that the city government controls, an illegal market where private traders sell water at high prices has emerged, exploiting people in poor neighborhoods. This illegal market has also led to decreased water quality and contamination issues.

“People here face water shortage, especially in the summer because the supply is low” Sorm Singh, a resident of Sangam Vihar, told the Hindu.

“I get to fill water only once in three days.”