The state's Senate passing legislation that could punish doctors who perform abortions with life in prison. 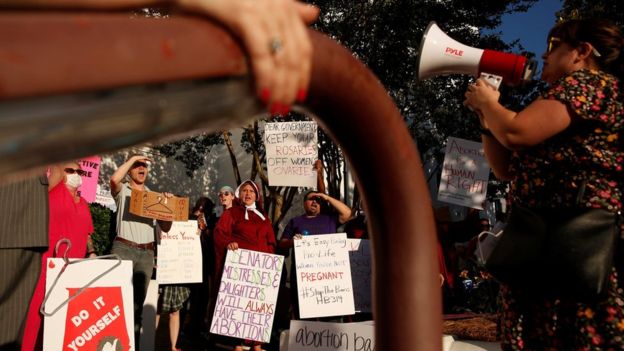 The state's Republican backers have pushed the legislation, which amounts to a near-total ban on abortion in the state, forward with the express goal of overturning Roe v. Wade, the Supreme Court case legalizing abortion. Alabama lawmakers join legislators in several other states in putting forth legislation to restrict abortion, such as Georgia's recent fetal heartbeat bill.

After more than four hours of debate, the Republican-led Senate voted 25-6 to pass HB 314, which would slap doctors with up to 99 years in prison for performing an abortion. The Alabama House passed the bill earlier this month.

The law only allows exceptions "to avoid a serious health risk to the unborn child's mother," for ectopic pregnancy and if the "unborn child has a lethal anomaly." Democrats re-introduced an amendment to exempt rape and incest victims, but the motion failed on an 11-21 vote.

Republican Gov. Kay Ivey will have six days to sign the legislation, though the bill would not take effect until six months after becoming law. Ivey has not publicly taken a stance on the bill but has previously aligned herself as anti-abortion, lamenting the courts striking down another Alabama abortion law last year.

"As this legislation is still making its way through the legislative process, the governor intends to withhold comment until it makes its way to her desk for signature," Ivey spokeswoman Lori Jhons said in a statement.

American Civil Rights Union of Alabama Executive Director Randall Marshall said that his organization would join with the national ACLU, Planned Parenthood, and Planned Parenthood of Southeast to challenge the bill in court within "a few weeks" should it become law.

The bill's consideration Tuesday made frequent reference to the chamber's dramatic vote last week to drop an amendment that would have made exemptions to abortions performed for instances of rape or incest.

Republican State Sen. Clyde Chambliss, who ushered the bill through the chamber, emphasized in his introduction that the bill impacts women who are "known to be pregnant" and would provide "every female that's pregnant or thinks they're pregnant, and the male who was involved, it gives them that window of time -- this bill does not change that window of time."

In a news release, Chambliss touted that his bill outlaws surgical abortions as soon as a pregnancy can be medically determined. Speaking on the Senate floor, Chambliss repeatedly referred to a "window" of time between conception and when a woman knows for certain that she's pregnant. The state senator said he believed that time was between about seven and 10 days.

"She has to take a pregnancy test, she has to do something to know whether she's pregnant or not," he said.

"You can't know that immediately, it takes some time for all those chromosomes and all that."

Many women don't yet know for certain that they're pregnant even at six weeks into a pregnancy -- the earliest a fetal heartbeat can be detected.

When Democratic state Sen. Rodger Smitherman asked what would happen under the bill to a young girl who was a victim of incest and found out she was pregnant, Chambliss said that he hoped that the bill would result in young women learning to seek physical and mental help quickly if they are abused.

"What I hope is, if we pass this bill, that all young ladies would be educated by their parents, their guardians that should a situation like this occur, you need to go get help -- you need to do it immediately," Chambliss said.

"Then also they can get justice in the situation," he added. "If they wait, justice delayed is justice denied."

Democratic state Sen. Vivian Figures told Chambliss that a rape victim's trauma "is not your business."

Figures proposed amendments to have legislators who backed the bill pay for the anticipated legal fees accrued by subsequent legal challenges, to expand Medicaid in anticipation of the bill's impact on low-income women, and to make having a vasectomy a class A felony, as the bill would designate performing an abortion. All three motions failed.

Eric Johnston, head of the Alabama Pro-life Coalition and the drafter of the initial legislation, told CNN that while the amendment to exempt rape and incest victims is "sympathetic" and "deals with very difficult issues," it would upend the law's legal standing.

"Regardless of how the conception takes place, the product is a child, and so we're saying that that unborn child is a person entitled to protection of law," he added. "So if, be it a rape or inecst conception, then it would be impossible to ask a judge which of these is protected by law and which is not."

Staci Fox, president of Planned Parenthood Southeast, told CNN before the chamber's vote that "even the authors of this bill know that it is blatantly unconstitutional and wouldn't stand up in court."

"We've seen the continual chipping away year after year in Alabama and efforts get bolder and bolder each year," Fox said. "I think with the President and now Kavanaugh on the court, the politics in Alabama just feel emboldened to take this egregious swipe at women's health care."

But in the larger legal landscape, Marshall cast doubt on whether this bill would ever take on Roe, citing how the case would take several years to get to the Supreme Court while several other states have already passed so-called heartbeat bills effectively banning abortion.

"There are already 14 cases nationwide in the pipeline, two of which are currently at the Supreme Court of the United States," he said. "The notion that somehow this is going to be the vehicle for the Supreme Court to reconsider Roe v. Wade is really misplaced."