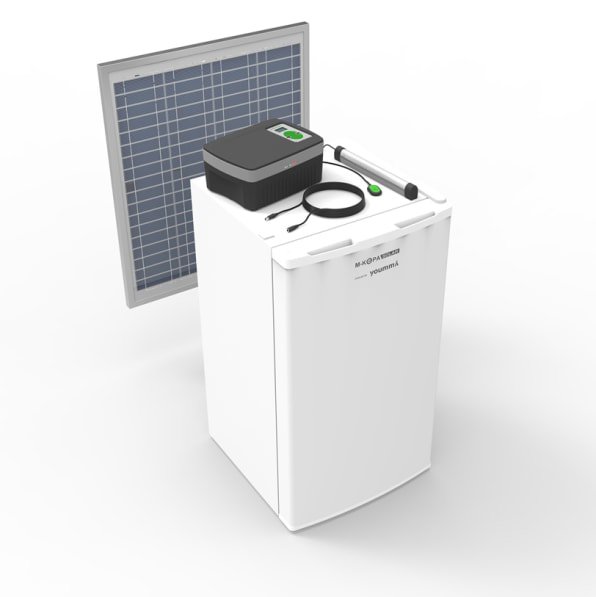 The Brazilian company Youmma is selling a solar-powered fridge to small businesses in sub-Saharan Africa that they can buy in manageable payments, according to Fast Company.
Source: Youmma

Any entrepreneur or business that deals with food needs to be able to store it in cool temperatures if they want to ensure its freshness for more than a day or two.

For hundreds of millions of people across Africa, that’s not possible because they’re not connected to the electricity grid and can’t afford expensive refrigeration technology. As a result, $4 billion worth of food — enough to feed 48 million people — is lost annually throughout the continent, according to the United Nations.

This loss undermines food security and climate goals across the continent. After all, food waste is a major driver of global warming.

Now a growing movement is seeking to provide farmers, small businesses, and restaurants with affordable, solar-powered fridges and other alternatives that can drastically reduce food waste, improve profit margins, protect the environment, and combat hunger.

Here are five companies that are ending food waste in Africa and beyond with pioneering technologies.

Up to 50% of agricultural products in Nigeria are lost before they reach the consumer, according to Nnaemeka Ikegwuonu, founder of storage company ColdHubs and winner of the 2020 Waislitz Global Citizen Disruptor Award.

ColdHubs currently serves 3,517 users with 24 Hubs that have saved over 20,000 tons of food from spoilage, increased user income, and created dozens of new jobs for women.

The Kenyan entrepreneur Dysmus Kisilu learned about the potential of solar storage while studying at the University of California, Davis, according to Kenya Climate Innovation (KCI).

He brought his knowledge back to his home country and set up solar-powered, walk-in fridges for small farmers who could buy crate space for an affordable price.

The fridges have helped reduce food waste, improved the bottom lines of farmers, and reduced land conversion in the country, according to KCI. Previously, farmers would have to clear forests to plant more crops because they knew they would be losing a sizable portion of their harvest. Now the loss rate is less, and land can be preserved.

Kisilu has also created educational opportunities to pass his knowledge forward. Solar Freeze has so far trained about 50 youth in the intricacies of solar energy.

“Although there is a lot of interest in solar energy and renewables, actual skill transfer is quite low,” Kisilu told KCI. “The technology is usually handed down fully assembled, and it is therefore hard to find someone to fix it when it breaks down. By training youth in this skill, the solar energy systems will last longer because local people will be able to repair it. Furthermore, jobs are created for the youth, which will empower them further.”

The Brazilian company Youmma is selling a solar-powered fridge to small businesses in sub-Saharan Africa that they can buy in manageable payments, according to Fast Company.

The fridges allow households and businesses to buy in bulk and not worry about food spoilage. In the long-run, people who buy the fridge can earn more money and get more of their time back because they no longer have to go to the market as often, Fast Company notes.

"It helps me preserve milk for up to 10 days," Kioko Mwange, a restaurant owner in Kenya, told CNN. "I have seen an increase in customers, and they are now confident about the quality of the milk I sell them."

Lawrence Okettayot has taken a different approach to fighting food waste in Uganda, the Guardian reports. The engineer has created a dehydration oven called the Sparky Dryer that farmers and gardeners can use to dehydrate excess produce and extend its shelf life.

The Sparky Dryer runs on biofuel that people can collect from around their home.

“Because in Uganda 80% of the population don’t have access to electricity, they can put anything from their garden, like leaves, sticks, anything that is not of use at the minute, and the catalytic converter converts the toxins into good gases so the gasification process has zero carbon-dioxide emissions,” says Okettayot.

The Sparky Dryer is cheaper than traditional drying ovens and is more effective than solar-powered devices, according to the BBC.

Okettayot’s family operates a farm and has struggled with food spoilage over the years. The Sparky Dryer has helped them and other food producers save and sell more crops, allowing them to earn more income, the Guardian notes.

The Evaptainer is a mobile, electricity-free cooling device that was born in a Massachusetts Institute of Technology classroom, according to the Borgen Project. The device allows farmers or entrepreneurs to cool produce or meat with an evaporative cooling rather than vapor compression.

Evaporative cooling works by having two chambers — one for the food and another that holds sand. When water is added to the sand, it gradually evaporates, and can cool the surrounding area by up to 20 degrees Celsius.

The Evaptainer hasn’t been rolled out on a broad scale yet, but it could end up helping people who lack access to the electricity grid and are often on the move to food markets and elsewhere, according to TechCrunch.