More than 600 divers from across the globe collected well over 1,000 pounds of trash in Florida. 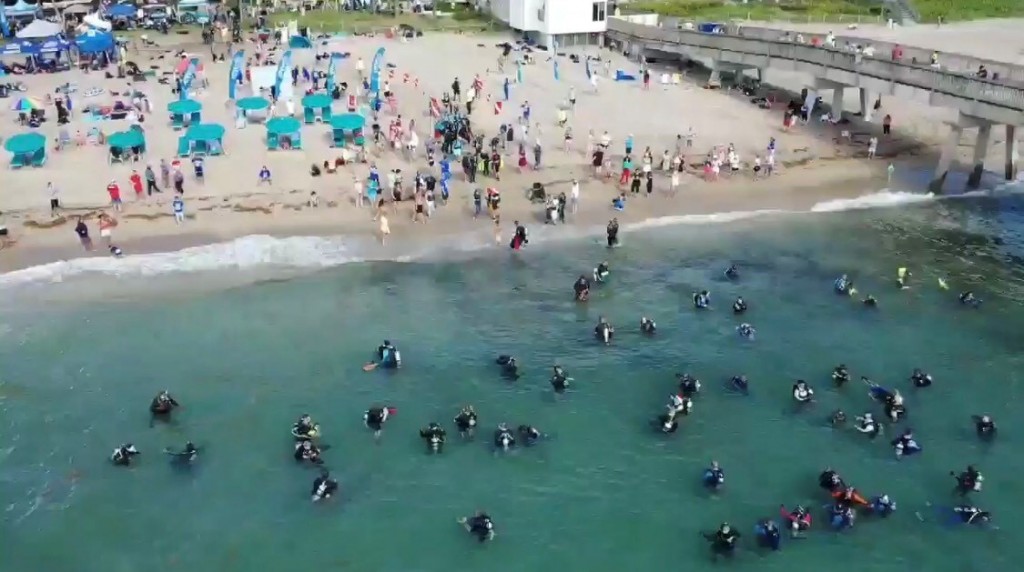 A group of 633 divers entered the waters of Deerfield Beach International Fishing Pier in Florida on Saturday, setting a new Guinness World record for the largest underwater cleanup as they jumped in to retrieve waste from the ocean.

While the official weight of the waste they collected has yet to be confirmed, the divers reportedly cleaned up at least 1,626 pounds of marine litter. Ocean conservation group Project AWARE believes the initiative could have yielded as much as 3,200 pounds of trash.

"This event brought together divers from all over south Florida for the purpose of engaging in conservation and achieving a community goal that has not been set for years, and never once considered in the United States," Jack Fishman, community conservation officer at Project AWARE, told Global Citizen. "This accomplishment of 633 divers who successfully removed 3,200 pounds of marine debris has led to a hugely successful endeavor of engaging local dive communities and officials to understand the importance of marine debris issues and removing them at-large."

The annual Save Deerfield Beach cleanup has been held every year for the last 15 years, with divers from across the country and around the world participating in the effort. The event, organized by local dive shop Dixie Divers and the Deerfield Beach Women's Club, was supported by Project Aware and diver training organization PADI.

“Obviously, trash was collected, but the beauty of it is with 633 divers, we were able to do a very thorough cleaning,” diver and environmentalist RJ Harper told the Sun-Sentinel.

According to environmental advocacy nonprofit Ocean Conservancy, there are 8 million metric tons of plastic pollution that end up in the world's oceans every year. Half of all plastic waste comprises of single-use products. Plastic is non-degradable, making the management of plastic waste difficult as it continues to proliferate at rapid rates. Landfills are overflowing with trash and single-use plastics — including straws, utensils, bags, and water bottles — that end up in the Earth’s rivers and water bodies, traveling from major cities to large oceans, where they pose a threat to marine life.

Harper reported that 1,600 pounds of lead fishing weights were also found, due to people cutting and leaving behind their fishing lines in the water, during the cleanup. An estimated 60 pounds of fishing line were retrieved by divers, according to CNN.

“All those times the line gets caught, you just never really think about it,” he said, highlighting another way that fishing can contribute to environmental degradation in addition to overfishing and habitat destruction.

Divers reported an abundance of marine life in the areas where the cleanup took place. However, as a fishing hotspot, the pier has become a major site of water pollution, said Tyler Bourgoine, one of Saturday’s participants and an organizer of the event.

City officials will oversee the appropriate disposal and recycling of all the debris retrieved, CNN reported.

While most Guinness World records can take months to be confirmed, Guinness adjudicator Michael Empric was at the pier on Saturday counting each head as divers entered the water, allowing this particular record to be announced on the day of the event itself, as the record was set. Divers had to remain in the water for at least 15 minutes for their participation in the cleanup to count.

The former record for the largest underwater cleanup was set in 2015 in the Red Sea in Egypt by former Egyption Army scuba diver Ahmed Gabr and 613 other divers. But Empric said it’s not the record that matters.

“What really matters is that everyone is out there cleaning up around the pier and trying to improve the community,” he told the Sun-Sentinel.