The Forest Green Rovers is a British football team that's carbon neutral, plays in a sustainable stadium, fully vegan, and on a mission to green up the sport. 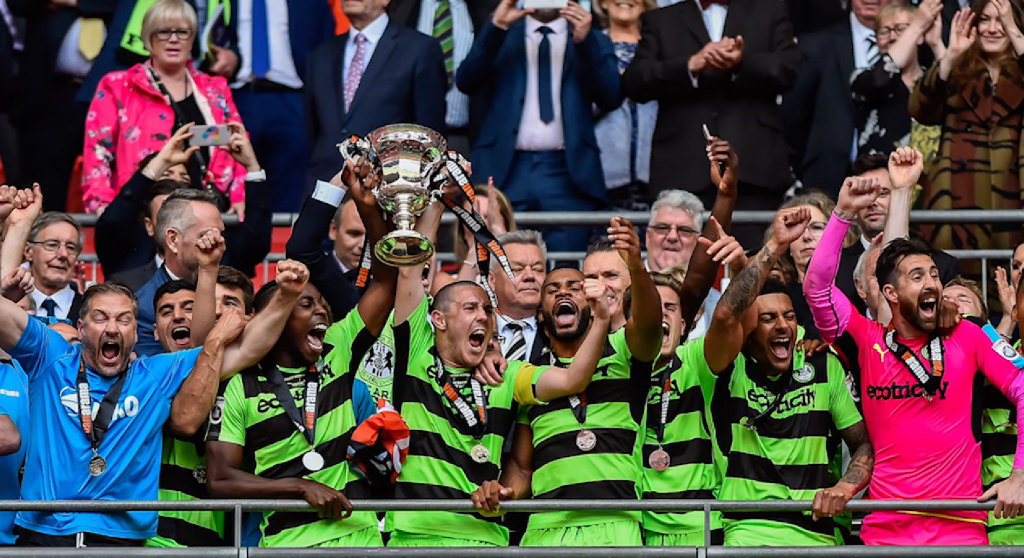 Located in the small town of Nailsworth in Gloucestershire, England, the Forest Green Rovers Football Club plays in the fourth tier of English football and is the smallest club to ever play in the professional leagues, but they have an unusually big impact. When the club was founded in 1890, they got their name from the neighborhood they played in, but now Forest Green has a very different meaning.

The club is working to bring together football (or soccer in the US) and environmental consciousness in a way no other club in the world is doing. That's because everything they do is sustainable. There are electric vehicle charging points at The New Lawn Stadium where the team plays, the energy the team uses comes 100 percent from solar panels, rainwater is recycled, the playing field is organic with no pesticide use, and the menu is vegan. Forest Green is the only club to be certified carbon neutral by the UN after signing up to the UNFCCC Climate Neutral Now initiative.

Forest Green chairman and founder of clean energy company Ecotricity, Dale Vince, told CNBC that sports are a good vehicle to carry the sustainability message. “Today 30 percent of Britain’s energy comes from renewable energy already, that’s increasing. Electric cars are on the verge of taking over the roads,” he said.

Vince became connected with the Green Rovers in 2010 when the club hit some financial snags and asked for a little help to get through the summer. Vince is a very successful businessman, who has been described as a “£100m hippy with wind in his turbines and Quorn in his burgers,” by Fast Company. Vince knew they needed more than a little money, but he didn't want to invest in a company that served meat to its employees and fans. He agreed to come on board but only if the team went vegan; meaning no meat or milk served in the club.

By 2015, the stadium became 100 percent vegan. The club is aware that this might sound strange to fans used to meat pies and greasy chips at matches, but since they replaced the old diet with veggie burgers, vegan fajitas, and a menu of locally sourced vegan dishes, they have made a big difference in the lives of the players and the fans. The food has the official seal of approval from the Vegan Society.

The club does not require the players to eat vegan off the field but some of them have embraced the vegan diet and there is a growing amount of research that shows veganism can provide athletes with the high-performance diet they need to perform.

Forest Green has just opened a new vegan catering company for schools aptly named Little Green Devils. The food is 100 percent vegan, and allergen-free and is available to schools across England. Little Green plans on expanding into broader markets like universities or any place that wants to serve vegan fare according to Fast Company.

The team is doing really well and making money but part of the drawer for Vince was a chance to spread his message of sustainability and environmentalism to the sports world. “In the last 12 months, we’ve reached 3 billion people between online, radio, and TV,” Vince told Fast Company.

The future looks very green for the team. The club has ambitions to move up in the English Soccer leagues and they are taking their Eco-friendly mission to a new level by planning on building a new stadium called Eco Park that will be the most sustainable stadium in the world.