The US state of Alabama is pioneering a project to train school staff - including teachers, coaches and administrators - how to treat pupils suffering from drug overdoses. 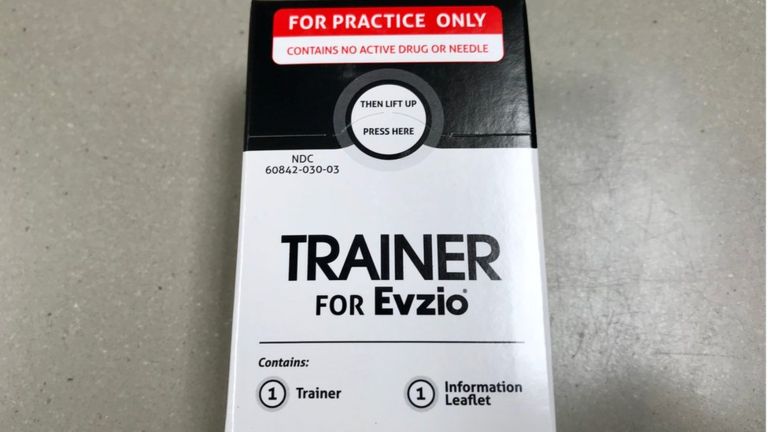 "Times have changed. Kids are getting things out of their parents' cabinets. They don't have to go out on the street, and they don't know what they are taking," says Jan Cibulski, school nursing supervisor in rural Shelby County - one of the regions signing up to the programme.

Until the start of the year, the state - like most others - recommended school nurses administer the treatment, but now they are widening the training to other teaching staff, as the opioid epidemic spirals nationwide.

The medication - naloxone - is being included in schools' standard emergency kits, alongside defibrillators and allergy-remedying Epipens.

For US teaching staff, the training could become another standard procedure, like shooting drills. Florida is considering a similar initiative.

In Columbiana, a small town in the heart of Alabama's Shelby County, the first training sessions are being held at a CTEC high school. Specialising in vocational skills, it has a well-equipped medical teaching room, including life-sized dummies that are usually used by pupils who want to go into nursing.

A demonstration on one of the mannequins shows how quick and easy the treatment is. After calling 911 and trying mouth-to-mouth, you press the Evzio auto-injector - which resembles a cigarette packet - against the patient's outer thigh, through their clothes. A stilted automated voice counts down how long you need to leave it in place (five seconds).

Using the device takes barely a minute, and then it typically takes around another minute or two for an unconscious victim to rouse.

The patient tends to spring up, confused and agitated, so part of the training involves preparing teaching staff for this shock. They will get tips on spotting signs of an overdose in the first place.

Alabama's department of education says the training has been designed to help teaching staff get over their fear factor associated with such an emergency. The injectors can't do any harm, they say.

Authorities say no child is known to have overdosed in Alabama's school system, but they fear it could be a matter of time. They say they want to be proactive, rather than wait for the first tragedy.

In 2015, the state was the highest prescribing state in the nation for opioid pain-relief prescriptions, according to the Center for Disease Control and Prevention.

The state is said to have more opioid prescriptions than people.

The non-mandatory scheme is available to every high school in the state. The costs are covered by a grant via the state's department of public health.

Jennifer Ventress - nurse administrator for the state's department of education - says there has been a "tremendous interest", and around 21 local education agencies have signed up since the scheme was first unveiled in January.

If funding can be secured, it will be offered to elementary schools, too.

Amy Mason, a principal at Madison County Elementary School in Gurley, a tiny town in the state's north, says she would definitely be interested. Her school takes pupils aged up to 13.

She had a wake-up call in 2015, when some of the older students were rushed to hospital after taking prescription drugs in the classroom. They did not overdose and the drug - Lyrica - was not classed as an opioid, but she says it was a career first for her and a sign of a widening problem. "The more training, the better it is for all involved," she says.

The project has been in the pipeline for two years, involving various bodies working together.

State Attorney General Steve Marshall told local news reporters that he had hesitated to back it at first, as he worried it would encourage more drug usage.

"I was talking to one of the doctors about that, and he looked at me and said, 'Well, I can't help them if they're dead'," Mr Marshall told the WAAY-TV. "That was an eye-opener for me."

He has since offered support. The issue has a personal significance for him as his wife killed herself last year after battling mental illness and addiction.

Board member Selina Mason told the BBC she hoped talking about the issue more would reduce stigma. "We still use terminology about letting people hit the bottom, we have to change that. We don't have the luxury of waiting. And there may be many bottoms, not just one."

She also talks from personal experience as the mother of a son who struggles with addiction. "I carry naloxone in my backpack. If a loved one is an opioid addict, you need to have it in your home, in your car, in your purse," she says.

The US surgeon general gave the same advice last year, instructing all Americans who are at risk of overdose - and those close to them - to carry naloxone. The Food and Drug Administration is also currently considering whether to recommend doctors prescribe the antidote at the same time as pain killers for patients considered at high risk.

Naloxone is already kept on hand in various community centres and police stations, and is stocked by plenty of pharmacies. It also comes as a nasal spray, often under the brand name Narcan.

However, although insurers often pick up the bill, it remains costly.

Kaleo, which produces the Evzio injector used in Alabama schools, came under criticism last year after hiking up its prices, from $575 (£435) to more than $4,000 per device. A Senate subcommittee report said the company was exploiting a national crisis.

The company rejected the accusation. It said a cheaper generic version ($178 for two) will launch later this year.

A bill that would allow naloxone to be available in schools in Florida was filed last month by a Democratic member of the Florida legislature, Jason Pizzo, and remains under consideration.

Unlike Alabama, the state has already had multiple cases of in-school opioid overdoses.

Two weeks ago, a 14-year-old boy was charged after bringing a prescription drug from his home and distributing it to classmates at Horizons Academy in Bradenton, Florida, according to the local press. Three students were taken to hospital, where one was revived with naloxone.