Nearly 21 million people worldwide are impacted by river blindness — and 99% are in Africa. 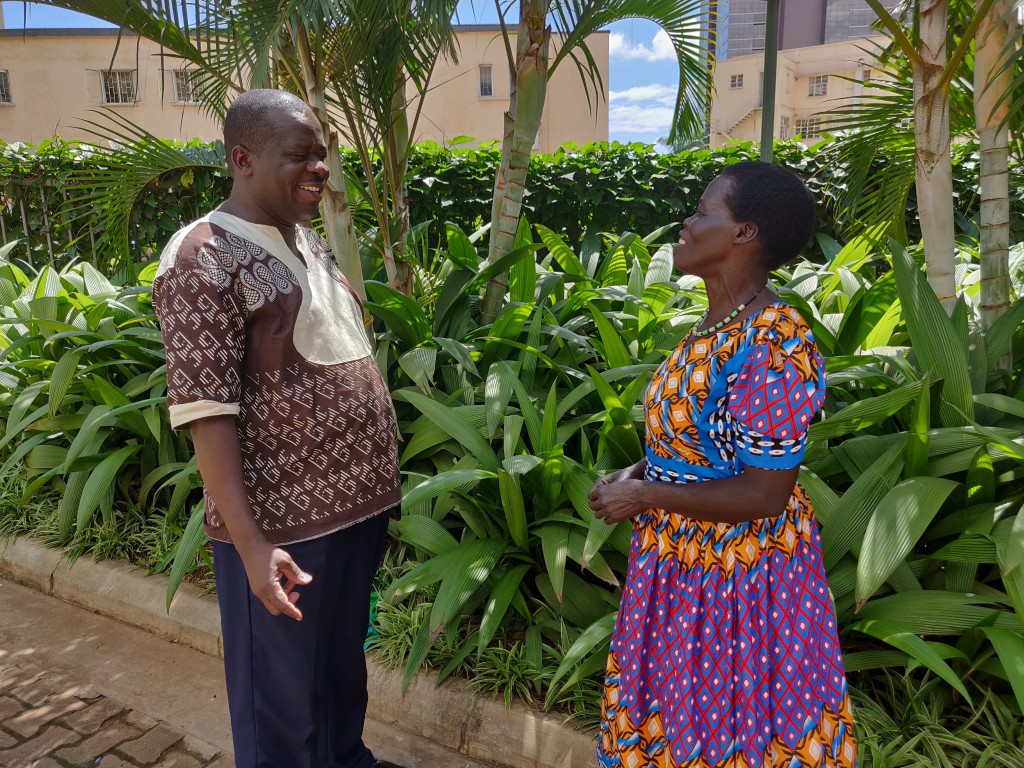 Betty Eyotau holds up a rock, drawing similarities between its scaly texture and a former skin condition she had. As she holds it between her hands, Eyotau draws attention to the bumps on the stone, which has dozens of small holes.

“My body was looking like this rock — it was rough. Everywhere was like this. My skin was very hard and at the same time it was itching,” she told Global Citizen in Kampala, Uganda.

During the daytime, Eyotau was sensitive to light. Her eyes would itch and tear up, and she was unable to see properly. She would wrap a cloth around her head and eyes to reduce the intensity of light and the headaches that would follow.

As a farmer, Eyotau would travel to a nearby forest to tend to her maize, cassava, and tobacco plants.

“I would continue working, although it was difficult. When the pain was too much, I would stop and go home,” she said.

Eyotau wasn’t the only one with these symptoms in her community.

Others in her village had eye problems and skin issues. At times, they would be so itchy that they would use maize cobs to scratch themselves in an attempt to feel relief, but that would sometimes create cuts and wounds, according to Eyotau.

“The whole village had this problem. We didn’t know what the cause was,” she said.

Some speculated it was leprosy, and it wasn’t until health volunteers visited her at home that she found she had a different neglected tropical disease (NTD) — river blindness.

Onchocerciasis, an NTD commonly known as river blindness, is an eye and skin disease that is spread by bites from infected black flies that live near fast-flowing rivers. Worm larvae invade the body through the bite, causing severe skin irritations, and the infection can eventually cause blindness.

Those who are infected with onchocerciasis typically have at least one of the following conditions: skin rashes, eye diseases, or nodules under the skin. According to the Centres for Disease Control and Prevention, the disease is “intensely transmitted in remote rural African agricultural villages which are located near rapidly flowing streams.”

This parasitic disease can be treated with Mectizan, a medication that stops the infection from spreading. While medication can help prevent further vision loss, there is no way to reverse blindness caused by the progression of the disease.

Eyotau, who knows three people who went blind because they were not treated in time, is thankful she received the medication before her condition worsened.

The medication, which was licensed by American pharmaceutical company Merck & Co. in 1987, is the reason researchers were awarded the Nobel Prize in Physiology or Medicine in 2015.

William Mugayo, a senior vector control officer and the river blindness coordinator at the Ministry of Health in Uganda, says that the country has been working to eliminate this disease since the early 1990s.

Initially, community medicine distributors were selected to go house to house distributing medication to treat the infection. However, people migrating for work opportunities posed a challenge in reaching all people for mass drug administration, Mugayo explained.

“That was the biggest challenge. You want to reach everybody but they have migrated, you can’t trace them and then tomorrow, by the time you end the campaign, they come back — they are [back and forth] because of work opportunities,” he told Global Citizen.

River blindness treatment involves multiple doses as the adult worms — which stay in the body for the longest period of time — are not easily impacted by the drugs.

In 2013, the ministry began vector elimination to supplement the mass drug administration, according to Mugayo. This meant that in addition to treating people with medication, the ministry also began “river dosing” — putting incesticide in the river where black flies bred in order to kill the larvae to prevent new transmission and contain the disease.

That same year, Uganda’s Ministry of Health determined 19 transmission zones in the country. To date, the disease has been eliminated in nine of those zones according to WHO standards, which means there is less than a 0.1% prevalence rate.

In addition, transmission has been interrupted in 9 other zones — which means the disease is now only active in one zone. This zone, in the districts of Moroto, Nakapiripirit, and Nabilatuk, is in northern Uganda, where Dr. Johnson Ngorok, the country director of Sightsavers Uganda, says treatment was interrupted in the 1980s due to conflict by rebel groups. Over the last decade, as the area stabilized, treatment resumed, but it must continue for about another five years before the ministry expects to eliminate the disease.

All told, 4 million people in Uganda are now free from the threat of river blindness.

Ngorok says this success is because of several factors including a broad partnership, which included the Ministry of Health, the World Health Organization (WHO), nonprofits such as Sightsavers, and pharmaceutical companies.

He also says free and easy access to the drugs has been key, as well as their community approach, which involves volunteers managing the outreach activities, such as screenings and treatment.

The WHO has set a target of eliminating the disease in Africa by 2025. Ngorok says this is unlikely.

“If you look at post-conflict countries in the continent, there is no way they can reach this target because treatment is disrupted,” he said.

However, he is hopeful that Uganda will become the first country in Africa to eliminate river blindness, and that it is possible to do so by 2025.

Uganda is one of three countries (alongside Sudan and Venezuela) that stopped mass drug administration for river blindness and completed three years of post-treatment surveillance in at least one transmission area.

The Global Burden of Disease Study showed that there are nearly 21 million people worldwide infected with river blindness, and more than 99% of infected people live in Africa, according to the WHO.