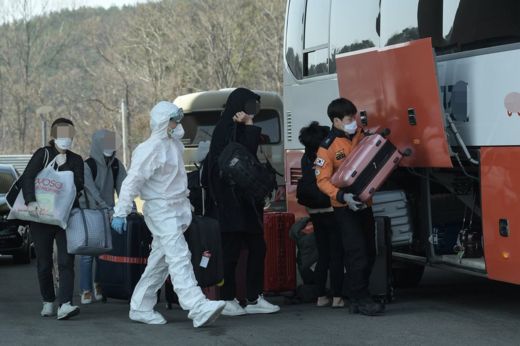 But health officials warn against complacency, saying the country still faces a long war against the infection.

Europe is currently at the centre of the pandemic.

In New York, the city mayor warned of a worsening outbreak, with damage accelerated by shortages of key medical supplies.

And the expectation that the battle against the virus will be a long one was reinforced by news from Japan that its prime minister has admitted for the first time that the 2020 Tokyo Olympic Games could be postponed.

Nearly 20,000 people are tested every day for coronavirus in South Korea, more people per capita than anywhere else in the world.

The country has created a network of public and private laboratories and provides dozens of drive-through centres where people with symptoms can check their health status.

South Korea developed its approach after an outbreak of Middle East Respiratory Syndrome (Mers) in 2015, when 36 people died in the country, which had the second-largest number of Mers cases after Saudi Arabia.

Mers forced the country to reassess its approach to infectious diseases and its Centres for Disease Control set up a special department to prepare for the worst, a move which appears to have paid off.

Laws on managing and publicly sharing information on patients with infectious diseases changed significantly after Mers and could be seen in action this year when the government used phone alerts to tell people if they were in the vicinity of a patient.

This weekend, the government stepped up preventative action by sending out emergency alerts urging people to stay away from places which encourage mass gatherings such as churches, karaoke rooms, nightclubs and gyms.

It also asked religious leaders to check the temperature of followers and keep them at least two metres apart during any services they deemed necessary.

A number of churches are now facing legal action after violating the guidelines.

The country has seen two waves of infections, Yonhap news agency reports, the first beginning on 20 January with the first confirmed case, and the second with mass infections among a religious group.

Now there are fears that imported cases could fuel a third wave.

The government plans to install around 20 phone booth-style test facilities inside Incheon Airport to speed up the process of testing all arrivals from Europe.

The new entry procedures started on Sunday. So far 152 people have arrived in the country showing symptoms of the virus and they are awaiting their test results.

South Korea is at a critical juncture. Yes the aggressive use of technology to trace the virus and the mass testing of all who've been in contact with the infection appears to be a strategy that has worked but the question doctors across the country are asking themselves is - what comes next?

The aim is to reopen schools in two weeks' time. That is why the government is sending out urgent messages calling on the population to maintain social distance measures for the next 15 days to avoid any spike in infections. Spring has arrived and people are eager to enjoy themselves. The sense of solidarity that this is a battle to be won together is crumbling slightly. Health officials are hoping the stark warning that this is a prolonged war will encourage them to hold the line and stay away from mass gatherings.

Doctors, meanwhile, are discussing the next possible steps. The trace, test, treat approach will continue. But it will also need to be thought through. For instance, what happens when classrooms become infected? Do they isolate the entire school? Shut down all schools again? Continue to disrupt normal life?

At a press conference, the head of the National Medical Committee, Dr Oh Myoung-don, told reporters there could be another spike in infections once schools re-opened. He is also concerned about a possible resurgence of the virus this coming winter. He raised the possibility that it may be time to allow part of the population to get sick. The "herd immunity" theory. He acknowledges the risk but also believes now is the time to be having these conversations and warn the public.

The paradox of South Korea's success is that having worked so hard to lower infection rates, their medics have to keep going. It's a bit like climbing a steep mountain without knowing how high the peak will be or what obstacles may be in the way. The dire situation in Europe also has many here anxious that if they let up just a little, that too could be their fate.