Swarms have already destroyed hundreds of thousands of acres of crops and farmland in Africa. 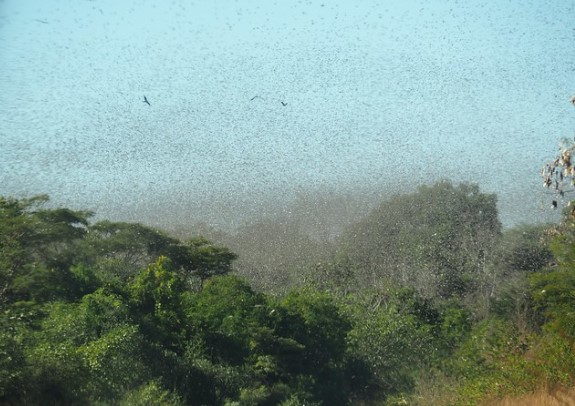 Swarms of locusts, a species of short-horned grasshoppers, have invaded eastern and northern Kenya from Somalia and Ethiopia, threatening food security in the region, Agriculture Minister Mwangi Kiunjuri said on Friday, according to Reuters.

The locust swarm initially began spreading into Kenya around Dec. 28 and has since infested three separate counties.

“We recognize that the pest invasion, and the potential to spread rapidly to other counties poses an unprecedented threat to food security and livelihood in the country,” Kiunjuri said.

So far, the locusts have destroyed several pastures belonging to cattle herders in more arid regions.

On Jan. 6, the Food and Agriculture Organization (FAO) released a statement revealing that it is unlikely the Kenyan locust swarms will reproduce, unlike those in Somalia.

The swarms pose another threat, however. FAO believes the locusts may very well spread to Uganda and South Sudan, both of which border Kenya.

While the locusts have just recently crossed into Kenya, Africa and the Middle East have been dealing with the largest locust infestation in a quarter of a century for over a year now.

“This infestation kicked off a year and a half ago when two rare cyclones hit the Arabian Peninsula,” Keith Cressman, the UN Agricultural Agency’s senior locust forecasting officer, told NPR. “The swarm drifted with the winds to Iran, which, under sanctions, didn't have the right pesticides. And it ended up on the border between Pakistan and India at a time when the two countries were more concerned about Kashmir than pests.”

The multiple monsoons caused an elongated breeding period, after which the locusts crossed into Yemen and migrated to Somalia soon after.

Locusts ruined more than 175,000 acres of Somali and Ethiopian farmland in December, further threatening the food supply in an already food-insecure region.

After swarms of locusts wreaked havoc on Somalia’s crops, yet another cyclone met the locusts inland, causing them to breed again, and winds carried them into Africa.

While there is a low risk of breeding among the locusts in Kenya, Cressman still warns that further reproduction could be catastrophic for the country’s food supply, especially given the region’s increased rainfall, which is an ideal breeding condition for desert locusts.

“A locust swarm can come into a farmer's field in the morning. And by midday, the field is gone,” Cressman said. “If nothing is done, these creatures could tip an already food-insecure region into serious problems.”

Teen vaping of marijuana is on the rise