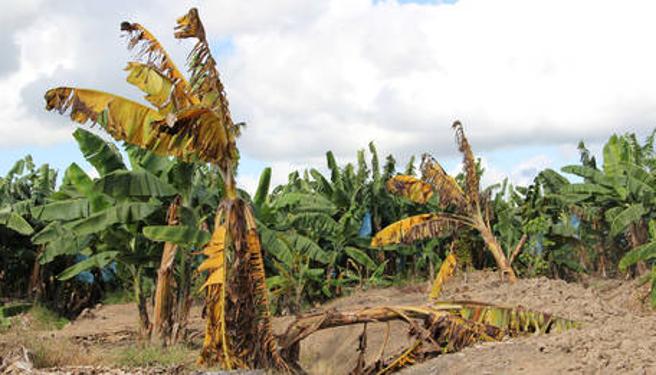 The Cavendish banana is one step closer to extinction. News has just come out of Colombia that banana plants have tested positive for Panama disease Tropical Race 4 (TR4), despite Latin America's years-long effort to prevent it from reaching the continent. The country has declared a state of emergency.

TR4 infects plants with a fungus called Fusarium, which wilts the plants and eventually prevents them from producing bananas. Gert Kema, professor of tropical phytopathology at Wageningen University in the Netherlands, was involved with testing the Colombian soil samples that revealed the fungus. He said, "Once you see it, it is too late, and it has likely already spread outside that zone without recognition."

Cavendish is not the only banana that will be harmed. National Geographic reports,

"Panama disease TR4 has a notoriously broad host range, meaning it threatens nearly all of these varieties to some degree... No known fungicide or biocontrol measure has proven effective against TR4."

The problem is worsened by the way in which bananas are cultivated in enormous monocrops that lack diversity. This undermines a crop's resilience, leaving it vulnerable to diseases such as this one. We should have learned our lesson years ago because the same situation played out in the mid-20th century, when the popular Gros Michel banana – the main variety exported to Europe and North America at the time – nearly went extinct from an earlier strain of Panama disease, TR1. It was replaced by the Cavendish, but this time there is no known banana strain that can resist TR4.

Colombia is fighting to keep TR4 contained, but it shares a border with Ecuador, which is the world's largest banana exporter and very concerned about what will inevitably happen. The banana is one of Latin America's top economic resources and its destruction will be devastating for the entire continent.

Meanwhile, the world's hopes lie with biotechnologists in Queensland, Australia, who are experimenting with genetically modifying Cavendish bananas to resist TR4. Trials have been successful so far, but it remains to be seen if the changes can be adopted globally, and whether people will accept a modified banana.