The coal mine that ate a forest

More than a third of Germany's electricity is still produced by burning coal - mostly dirty brown lignite - and environmental activists are fighting to change this. 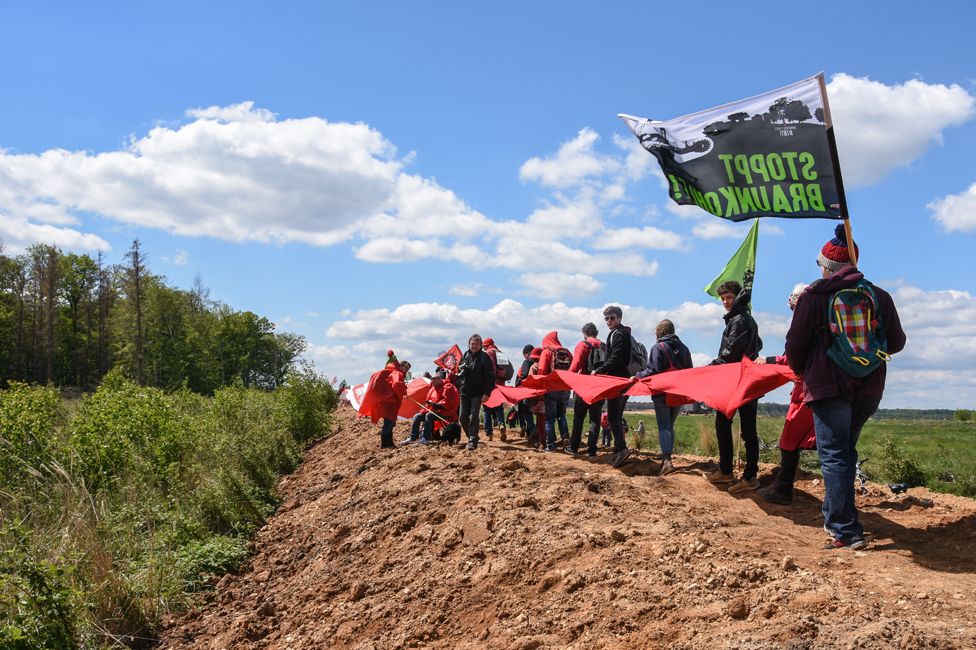 A small area of forest not far from the Dutch border has become the focal point of their campaign.

It's almost a uniform that they're wearing - heavy boots, dark trousers, a hooded fleece and a scarf covering nose and mouth. There are three of them: Mona, Omo and Jim. They appear to be in their early 20s, and they say they want to change the world.

"We're fighting capitalism and the big companies who are ruling the world and destroying it for profit," says Jim.

We're sitting under the trees of the Hambacher Forest, in the west of Germany, 30km (20 miles) from the city of Cologne. They all live in the "Hambi", as they call it, in tree houses like the one above us, nestling in the branches of an oak.

They're here because the Hambi is threatened with total destruction. There's not much of it left now. The forest sits atop one of the largest coalfields in Europe and since mining started in 1978 the trees have been gradually stripped away to allow the excavators access to the riches that lie beneath - millions of tons of coal, coal that keeps industry running in this part of Germany and provides thousands of people with a living.

To add insult to injury, the coal that is extracted here is brown coal, also known as lignite, which emits particularly high levels of carbon dioxide.

Only 10% of the Hambi is still standing. But that 10% has become a powerful symbol for Germany's climate change movement. Mona, Omo and Jim represent the hard core, the ones who are prepared to live outside through freezing winter nights to defend the trees.

Today they've got visitors, several hundred of them, who've come to demonstrate their solidarity with the activists and their anger with the mining company, RWE. "Hambi bleibt!" they chant - let the Hambi stay.

They're from Cologne, and from Aachen, and from places in between. One woman is from the Netherlands, just across the border.

"I've come here to protest," says Peter, who is originally from Kenya, but now works in Bonn. "I think Germany should take a more active role in stopping fossil fuels."

They gather outside the village of Morschenich and walk a few hundred metres into the forest, stopping on the way to marvel at the scale of the mine, a huge gash in the landscape, and at the size of the excavation machines, monsters in latticed metal.

They've been asked to wear red and they form a straggling line along a bank of earth that separates the forest from the lip of the mine. The "red line" sends a clear message: this far and no further.

Last year the Hambi was the scene of a huge confrontation. RWE wanted to start felling trees again. The police arrived, in their thousands, to evict the activists - who had already been living there for several years - and to pull their treehouses apart.

"It's heavy to see how your home just gets destroyed," says Omo. "The treehouse that you built and where you lived and where you spent so much time. And then you see hundreds and hundreds of cops running through your home. It's a heavy thing to see."

The evictions were suspended temporarily when a young man, who's been described both as an activist and a journalist, fell from an overhead walkway and was killed. Then, after an application by Friends of the Earth, a court imposed a temporary tree-felling ban, on conservation grounds.

RWE has now said it has no plans to start felling again, at least until the late summer of 2020. There are further indications that the forest may yet survive. A government-commissioned report published at the beginning of this year, which recommended that Germany close all its coal-fired power stations by 2038, also said that retaining what remains of the Hambacher Forest would be "desirable."

But the activists are suspicious.

"In October 2020 they might be allowed to cut again," says Jim. "So, we need to build up the pressure on the government, and on the company, so that they're not allowed to."

As well as "Hambi bleibt," another chant echoes through the trees. "Alle Dörfer Bleiben"- let all the villages stay. Surface mines, like the Hambacher mine, have as little respect for villages as they have for forests. It's estimated that 300 German villages have been demolished since 1945 to make way for coal extraction.

The activists' concern comes a little late for Manheim, just a couple of kilometres down the road from the forest.

Stand at the crossroads outside the old bakery in the early evening and listen. You'll hear the twittering of the birds. But you won't hear anything else. No dog will bark, no bicycle bell will ring. You'll hear no friendly greeting. In fact, you won't see anyone at all.

Walk up past the fire station and you'll begin to understand why. There are wide open spaces where whole streets have disappeared. A few houses still stand, abandoned and broken, waiting for the demolition crews to come and rip off the roofs and bulldoze the walls. At this time of day, the excavators are locked away, large blue diggers hunkered down behind razor wire.

Manheim is a ghost village, a shadow of the busy agricultural community it once was. Of the 1,600 residents only a handful are left, and they'll all be gone in a couple of years. Morschenich awaits the same fate - two villages that will disappear from the face of the Earth.

The razor wire tells its own story. In other villages, machinery has been sabotaged and set on fire. That's not happened here but the activists have not endeared themselves to the villagers. Last year, after they were evicted from the forest, several occupied empty houses. The police came to move them on, and RWE decided to demolish part of the village ahead of schedule to discourage more occupation.

"I came to watch the house being pulled down, and I don't deny that I shed a few tears," says Claudia Jakobs, who now lives with her husband Marco in the new village, Manheim-Neu, that's been slowly taking shape a few kilometres away. But she says she's happier now that the old house is gone.

Before it was pulled down, she would find herself driving past every day just to check everything was all right - that no campaigners had broken in.

Kurt and Cilly Rüttgers too have also been unsettled by the presence of the activists. They used to run one of the pubs in the village, Zum Roten Hahn (the Red Rooster), which has been in the family for 150 years. Photographs adorn the walls and trophies line the shelf above the bar. But no beer has been served here for nearly 10 years. Kurt and Cilly's children didn't want to take the business over in a village that wouldn't exist for much longer.

Recently they've had what Cilly describes as "uninvited guests". Kurt shows me the garden house at the back of the pub, a small room with basic cooking facilities. "They broke the windows and ripped down the curtains," he says. "And they hung blankets in the windows so that the light wouldn't show."

"Kohlegegner," says Cilly sharply. Literally, "coal opponents" - in other words, climate change activists. Cilly says she has never before been afraid living in Manheim, but the sight of protesters in the village with scarves over their faces does scare her.

That description, Kohlegegner, is telling. People in Manheim, it seems, are defenders of coal, despite the imminent loss of their village; coal has provided jobs in this region for decades.

Kurt says that as long ago as the 1950s, when he was growing up, it was common knowledge that one day the village would disappear. This may explain why some of the villagers resent outsiders coming to Manheim now and telling them what to think and how to behave.

Hubert Perschke is one of those outsiders. He's an activist and photographer who lives in a village nearby and has documented the gradual destruction of Manheim over several years.

"It's true that most of the people here didn't want the empty houses to be occupied," he says.

But he says there has been sympathy for the activists as well.

"There were some people who brought food and clothes over," he says. "And there were some who told them where they might find a key for an empty house."

And he defends the right of the activists to use the Hambacher Forest for their protest.

"Coal has a tradition here. It's a cultural asset," he says. "And, as outsiders, we're challenging that. We're saying clearly that there are more important things - like the climate."