Seasonally occurring fields of aufeis (icing) constitute an important resource for the water supply of the local population in the Upper Indus Basin. However, little research has been done on them so far. 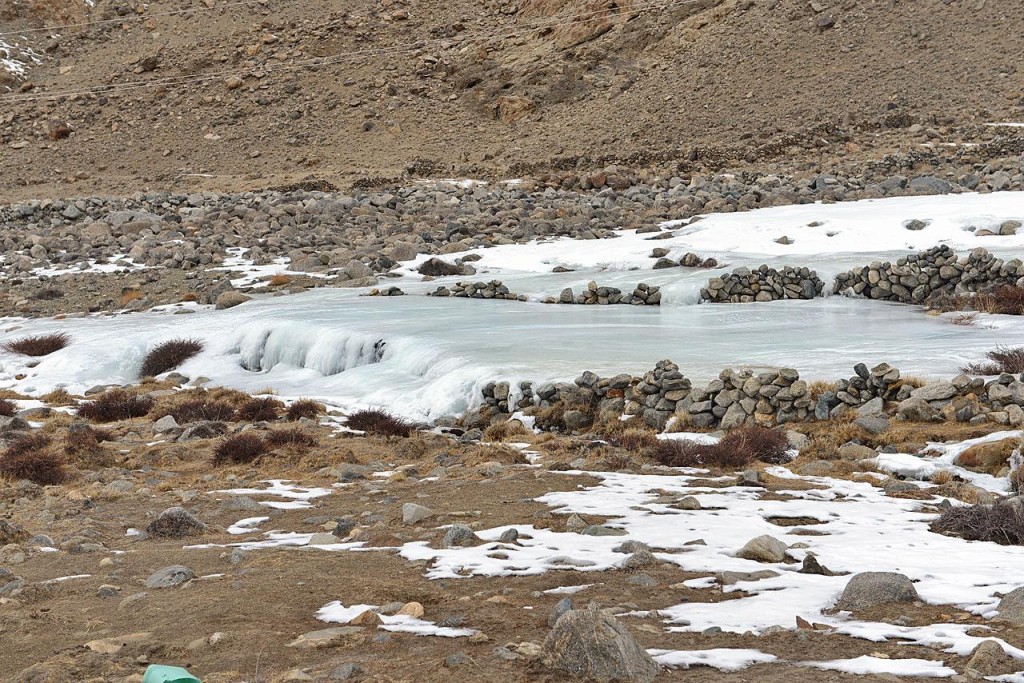 Geographers at the South Asia Institute of Heidelberg University have now examined the spreading of aufeis and, for the first time, created a full inventory of these aufeis fields. The more than 3,700 accumulations of laminated ice are important for these high mountain areas between South and Central Asia, particularly with respect to hydrology and climatology.

In the semi-arid Himalaya regions of India and Pakistan, meltwater from snow and glaciers plays an essential role for irrigation in local agriculture and hydropower generation. In this context, aufeis has been given little attention. It appears as thin sheet-like layers of ice that form through successive freezing of water and can be several meters thick. This phenomenon occurs on a seasonal basis below springsheds, along rivulets or streams under conditions of frequent freeze-thaw cycles. “In individual cases, this process is deliberately fostered through the construction of stone walls. These artificial reservoirs are used in some valleys of Upper Indus tributaries as water harvesting measures to bridge the seasonal water shortage in spring. However, the amount of ice, size and number of natural aufeis fields have been unknown so far,” underlines Prof. Dr Marcus Nüsser from the South Asia Institute of Heidelberg University.

The Heidelberg geographers have now compiled an inventory of these fields for the whole Upper Indus Basin and, in this context, also analysed the role of topographical parameters such as altitude and slope. The basis were several field campaigns spent in the region along with the evaluation of almost 8,300 Landsat satellite images taken between 2010 and 2020. With this imagery, the scientists were able to record the characteristic seasonal formation of aufeis and map the annually recurring bodies of ice. They detected over 3,700 aufeis fields, covering a total area of approximately 300 square kilometers. The majority of the aufeis fields lie in the Trans-Himalaya of Ladakh and on the Tibetan Plateau. In contrast, they hardly occur at all in the western part of the Upper Indus region, Marcus Nüsser explains.