The River Thames has some of the highest recorded levels of microplastics for any river in the world. 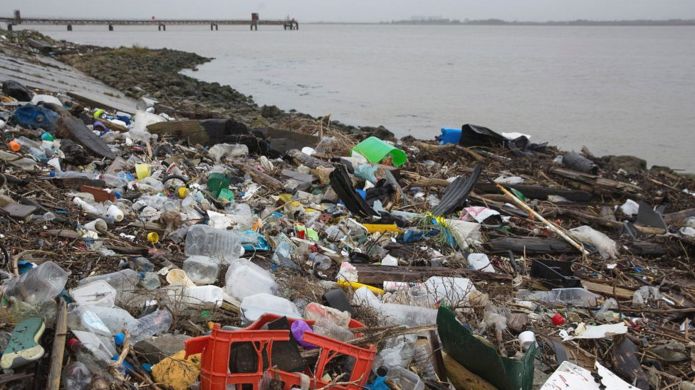 Scientists have estimated that 94,000 microplastics per second flow down the river in places.

The quantity exceeds that measured in other European rivers, such as the Danube and Rhine.

Tiny bits of plastic have been found inside the bodies of crabs living in the Thames.

And wet wipes flushed down the toilet are accumulating in large numbers on the shoreline.

Researchers at Royal Holloway, University of London, are calling for stricter regulations on the labelling and disposal of plastic products.

They warn that careless disposal of plastic gloves and masks during the coronavirus pandemic might make the problem of plastic pollution worse.

"Taken together these studies show how many different types of plastic, from microplastics in the water through to larger items of debris physically altering the foreshore, can potentially affect a wide range of organisms in the River Thames," said Prof Dave Morritt from Royal Holloway.

"The increased use of single-use plastic items, and the inappropriate disposal of such items, including masks and gloves, along with plastic-containing cleaning products, during the current Covid-19 pandemic, may well exacerbate this problem."

The scientists point out that the Thames is cleaner than it used to be with respect to some pollutants, such as trace metals.

Many forms of microplastics were found in the Thames, including glitter, microbeads from cosmetics and plastic fragments from larger items.

The bulk of the microplastics came from the break-down of large plastics, with food packaging thought to be a significant source.

Study researcher, Katherine McCoy, said, "Our study shows that stricter regulations are needed for the labelling and disposal of these products. There is great scope to further research the impacts of microplastics and indeed microfibres on Thames organisms."

Fibres from washing machine outflows and potentially from sewage outfalls, plus fragments from the breakup of larger plastics, such as packaging items and bottles, which are washed into the river.

Katharine Rowley of Royal Holloway said it's unclear why there's such a high density of plastic in the River Thames, but called for people to think about the plastic they use and throw away.

"People can make much more of a difference than they might think," she said.

Some animals living in the river are ingesting microplastics, including two species of crab.

Crabs contained tangled plastic in their stomachs, including fibres and microplastics from sanitary pads, balloons, elastic bands and carrier bags.

"Upon bringing these crabs back to the labs at Natural History Museum, it was shocking to find that they were full of plastic," said study researcher, Alex McGoran.

"Tangles of plastic were particularly prevalent in the invasive Chinese mitten crab and we still don't fully understand the reason for this."

Clams near the wet wipe "reefs" contained synthetic polymers, some of which may have originated from the wet wipes and other pollutants found on the site such as sanitary items.

Much of the work on microplastics has been carried out in seas and oceans rather than rivers.

By comparison, the Thames has higher quantities of microplastics than levels recorded in the Rhine in Germany, the Danube in Romania, the River Po in Italy and the Chicago River in the US.

However, levels appear lower than those reported for China's Yangzte river.

The latest research was carried out in collaboration with the Natural History Museum and Zoological Society, London.

Dr Paul Clark of the Natural History Museum said, "What our students have shown in this collaboration is that although the Thames is certainly cleaner with regards some chemical pollutants, eg. heavy metals, the River is severely polluted with plastic. And once again our wildlife is threatened."

The research is reported in two papers in Environmental Pollution and in one paper in Science of the Total Environment.