Prince William and Sir David Attenborough have joined forces to launch what they hope will become the "Nobel Prize for environmentalism". 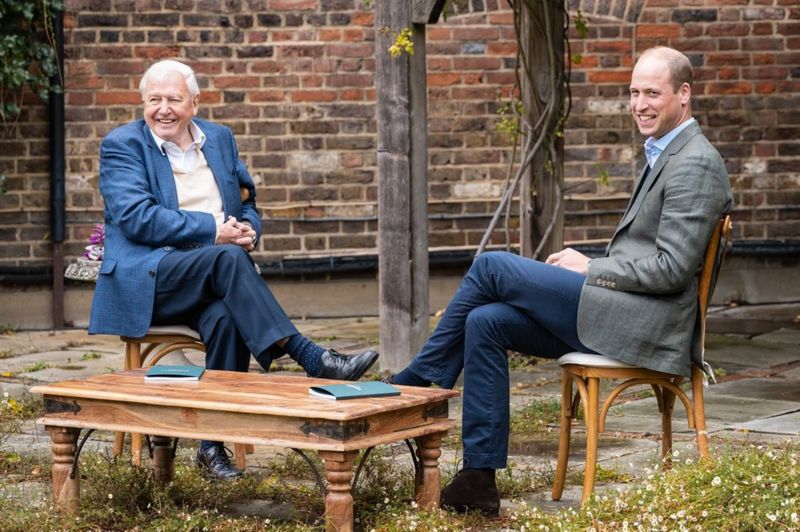 They say the search is on for 50 solutions to the world's gravest environmental problems by 2030.

With £50m to be awarded over a decade, the "Earthshot Prize" is the biggest environmental prize ever.

The Prince said "positivity" had been missing from the climate debate - something the award could supply.

"The Earthshot prize is really about harnessing that optimism and that urgency to find some of the world's solutions to some of the greatest environmental problems," he told the BBC.

Anyone could win,he explained, as he called for "amazing people" to create "brilliant innovative projects".

These, he said, could help save the planet.

To mark the event BBC Radio 4's Today Programme has secured an unprecedented exclusive joint interview with the Prince and Sir David.

During the conversation Prince William said the launch of the new prize marks the moment he takes up the baton of environmental campaigning from his father.

"I feel right now it's my responsibility", he said.

The world is "at a tipping point", explained the Prince, who said the Earthshot Prize is his and Sir David's effort to ensure we hand the planet on to our children and grandchildren "in a better state than we found it."

Nick Robinson quoted a Today interview with Prince Charles in which he had said sometimes his ideas on the environment were regarded as a bit "dotty".

"Was there a time when even you, I wonder, thought, what's my father banging on about?", Mr Robinson asked the Prince.

"I regularly wonder what my father's banging on about. I'm sure every son thinks the same," Prince William replied.

"He's talked about this for a long time and long before people sort of cottoned on to climate change. So, I've always listened to and learnt and believed in what he was saying."

"I think the dotty person now would be the person who doesn't believe in climate change," the Prince added.

The Earthshot Prize will make five awards of £1m each year for 10 years.

These "Earthshots" are intended as "universal goals to repair our planet by 2030" and will go to the best and most innovative ideas to help:

"We hope that this Earthshot Prize reaches everyone around the world," the Prince told Radio 4.

"From communities, schools, right up to banks, governments, corporations - anyone and everyone is a part of this and anyone could find the solutions that we need."

Even suggestions that "may sound crackpot" are welcome, added Sir David, so long as they have the potential to make a difference on what he called "the world scale".

The aim is to find "new solutions" that have a positive effect on environmental change and improve living standards globally, particularly those communities most at risk from climate change.

"There's a lot of people wanting to do many good things in the environment and what they need is a bit of a catalyst, a bit of hope, a bit of positivity that we can actually fix what's being presented", Prince William said.

The prize could go to a new technology, a new way of doing things or a new policy - basically any good idea.

The "Earthshot" name was chosen to echo the so-called "Moonshot": the huge US project to get the first person on the moon back in the 1960s when John F Kennedy was president.

"Suddenly we actually see the writing is on the wall," he told Radio 4.

We are already seeing the coral reefs dying, forests disappearing, the North Pole beginning to melt, he said.

"People can see it's happening and it is a matter of great urgency now."

Sir David said the aim is that the prize will give ideas "that strength, that financial impetus to spread and be developed."

Nominations will open on 1 November 2020 with an annual awards ceremony to be held in a different city each year, starting with London in autumn 2021.

The £1m on offer is designed as an incentive for people to apply, but don't think you can book yourself a Caribbean holiday or buy yourself a Lamborghini if you win, the money must be spent on developing your idea and trying to get it taken up around the world.

Prince William and Sir David will be joined on an "Earthshot Prize Council" by celebrities from the worlds of entertainment, sport, business, charity and the environment.

They will act as ambassadors, giving publicity to the prize and its winners and helping motivate people around the world to environmental action.

Meanwhile a coalition of individuals, businesses and organisations have provided the money for the prize and will help maximise the impact of the winners' ideas.

"Do you have a sense of how this fight can go on when you're no longer here?" Mr Robinson asked Sir David, who celebrated his 94th birthday in May.

The broadcaster said he believed there has been a global change in attitude to environmental issues.

These days people don't just see it as a "cranky, harmless interest" but as "a life and death issue."

"The disaster we are facing is on a scale that has not been seen since mankind existed," Sir David said.

Prince William and Sir David Attenborough have set themselves the dizzyingly ambitious goal of "repairing the planet by 2030".

So where will the potentially planet-saving ideas they want come from?

The answer is we just don't know - you might have an idea that, with a bit of publicity and cash, could reshape our world.

Which is why awarding prizes can be so effective: we can all apply.

The famous Longitude Prize, is a good example.

It was offered way back in 1714 for the first person who could solve the problem of how to tell your longitude at sea.

Knowing your longitude is crucial for navigation, it measures how far east or west you are, yet Britain's greatest seafarers and astronomers had failed to crack the problem.

The solution came from such an unexpected source - a humble clockmaker called John Harrison - that the authorities refused to grant it for many years.

Prince William hopes that similarly left-field ideas will be submitted for these "Earthshots".

It is why Sir David Attenborough said even seemingly "crackpot ideas" are welcome.

They know there is good evidence that the wider the pool of ideas, the more effective solutions are offered.

It allows people to post details of problems that are baffling them and offer rewards for crowd-sourced solutions.

Just as with the Earthshot Prize the aim is to call forth "insights, flashes of genius and ideas" from wherever they can.

A study found the further the problem in question is from the people who come up with a workable solution, the more likely they are to solve it.

Which is another way of saying we all might just hold the key to solving an environmental conundrum.

And it explains why Prince William and Sir David Attenborough are saying don't hesitate to apply if you think you've got an idea that could help.