Paris climate accords: US notifies UN of intention to withdraw

The US has begun the process of withdrawing from the Paris Agreement, notifying the UN of its intention to leave, as other countries expressed regret and disappointment at the move. 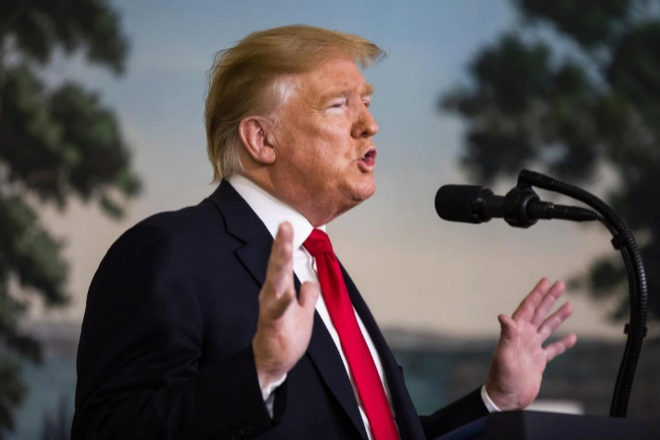 The notification begins a one-year process of exiting the global climate change accord, culminating the day after the 2020 US election.

The US government says the deal puts an "unfair economic burden" on Americans.

The agreement brought together 188 nations to combat climate change.

France and Japan have led international condemnation of the US move.

The Paris accord, agreed in 2015, committed the US and 187 other countries to keeping rising global temperatures below 2C above pre-industrial levels and attempting to limit them even more, to a 1.5C rise.

The decision to withdraw - taken by President Donald Trump after he came to office in 2017 - made the US the world's sole non-signatory and prompted high-level efforts by the European Union to keep the agreement on track.

However, hundreds of local governments, businesses and organisations in the US have joined the We Are Still In movement, pledging to cut emissions and move to renewable energy.

UN climate envoy and US entrepreneur Michael Bloomberg said in a statement posted on the movement's website that he was working to fill the funding gap left by the Trump administration's withdrawal, which he described as an "abdication of leadership".

The US issued its formal notification on the first day it was possible to do so.

Mr Trump had made withdrawing from the agreement one of his election campaign pledges but UN rules had meant it was not possible for the US to start the withdrawal process until 4 November 2019.

The withdrawal is still subject to the outcome of next year's US presidential election - if Mr Trump loses, the winner may decide to change course.

But scientists and environmentalists fear the effect the Trump administration will have on climate protections in the meantime.

A report issued in December 2018 by the Institute of International and European Affairs suggested President Trump's decision to leave had done "very real damage" to the Paris agreement, creating "moral and political cover for others to follow suit".

The decision by the US - one of the world's biggest emitters of greenhouse gases - drew condemnation from environmentalists and expressions of regret from world leaders.

An official for France's presidential office said "we regret this and this only makes the Franco-Chinese partnership on the climate and biodiversity more necessary."

French President Emmanuel Macron and his Chinese counterpart Xi Jinping are due to meet in Beijing on Wednesday, where they are expected to sign a statement declaring the "irreversibility of the Paris accord", the official added.

Nancy Pelosi, the Democratic speaker of the House, condemned Mr Trump's move as a "disastrous decision that sells out our children's future", while former vice-president and climate campaigner Al Gore derided those who would "sacrifice the planet for their greed".

"It is about the darkest moment in American diplomacy in a very, very long time and a huge blow to global efforts," Bill McKibben, leader of climate campaign group 350.org, told the BBC's Newsday programme.

However, the move was welcomed by Republican congressman Gary Palmer, who tweeted: "It is high time for the US to leave this overly regulative and burdensome agreement that doesn't really address climate change."

US Secretary of State Mike Pompeo said on Monday that the agreement had imposed an "unfair economic burden" on the United States.

Instead, he said, the US would follow "a realistic and pragmatic model", using "all energy sources and technologies cleanly and efficiently".

Mr Trump promised to turn the US into an energy superpower, and has attempted to sweep away a raft of pollution legislation to reduce the cost of producing gas, oil and coal. He has characterised former US President Barack Obama’s environmental clean-up plans as a war on American energy.

He has also suggested that the Paris Agreement gives China and other big polluters an unfair advantage over the US by allowing them to continue to increase emissions.

Announcing his decision to withdraw in June 2017, Mr Trump said: "I was elected to represent the citizens of Pittsburgh, not Paris. I promised I would exit or re-negotiate any deal which fails to serve America's interests."

He claimed the agreement would cost the US $3tn in lost economic output and 6.5 million jobs.

But a US government report last year said that, on the contrary, unchecked climate change would cost the US hundreds of billions of dollars.

Reports suggest the Trump administration has made no effort to renegotiate the Paris agreement.

The US contributes about 15% of global emissions of carbon dioxide, but it is also a significant source of finance and technology for developing countries in their efforts to fight rising temperatures.

Climate change, or global warming, refers to the damaging effect of gases, or emissions, released from industry and agriculture on the atmosphere. The Paris accord is meant to limit the global rise in temperature attributed to emissions.

Keep global temperatures "well below" the level of 2C (3.6F) above pre-industrial times and "endeavour to limit" them even more, to 1.5C

Limit the amount of greenhouse gases emitted by human activity to the same levels that trees, soil and oceans can absorb naturally, beginning at some point between 2050 and 2100