There’s only one way to stop the inevitability of sea level rise. 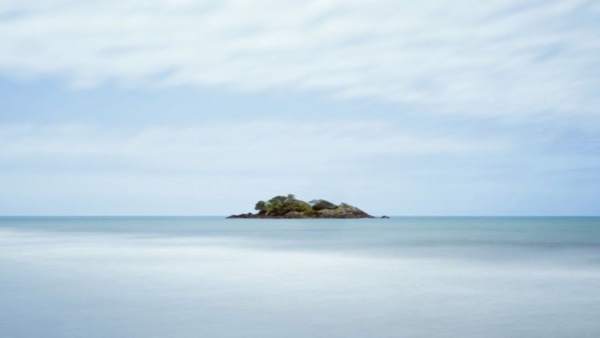 A small island off the northeast coast of Japan recently slipped under the waves, becoming the latest victim of rising sea levels, according to the Guardian.

The island, Esanbe Hanakita Kojima, was uninhabited and spanned less than a mile.

Its tiny size may explain why its disappearance went unnoticed for several weeks until the author Hiroshi Shimizu visited the town of Sarufutsu, which has a view of the island, to work on a sequel of a picture book on Japan’s “hidden islands,” the Guardian reports.

When he looked out to the Pacific Ocean, he noticed the island had vanished and he alerted local fishing authorities who, after conducting a survey, agreed that it had been swallowed by the ocean.

Japan’s coast guard will confirm the island’s fate in the weeks ahead.

In addition to rising sea levels, the island was eroded over the years by ice drifts and wind, according to Global News.

Esanbe Hanakita Kojima was located in a region of territorial dispute between Japan and Russia and only gained its name in 2014 when Japan sought to assert control of the region. Japan also has maritime disputes with China in the East China Sea.

In both cases, countries make claims to parts of the ocean to take control of fishing and resource extractions rights, clarify shipping lanes, gain access to land, and conduct military exercises.

The small island’s disappearance, while not of any critical strategic importance, could shrink Japan’s exclusive economic zone.

Of bigger concern, however, are the climate change implications of this development.

As sea levels rise, low-lying coastal nations and islands are increasingly threatened. At least eight Pacific Islandshave gone underwater in recent years, and thousands of more islands are at risk in the decades ahead.

The Marshall Islands, in particular, are highly vulnerable to sea level rise and their disappearance would displace tens of thousands of people.

Esanbe Hanakita Kojima may have been uninhabited, but many coastal areas are teeming with people.

Overall, hundreds of millions of people are expected to be displaced from coastal areas as a result of sea level rise. Adding powerful storms to this mix could multiply the number of displaced persons, especially if recent history is any guide. In 2017, there were more than 18 million people displaced from weather-related events, including 7.5 million from storms.

Many coastal areas are trying to ward off the advance of the oceans by building sea walls, extending their coastlines, and implementing elaborate pump systems, but the only definitive way to stop the inevitability of sea level rise is by lowering greenhouse gas emissions.