Hurricane Florence took a slight turn to the southwest as it charged toward the Carolinas on Wednesday, with forecasters warning that the Category 3 storm might now produce catastrophic flooding and rain in a larger swath of the coast and farther inland than previously predicted. 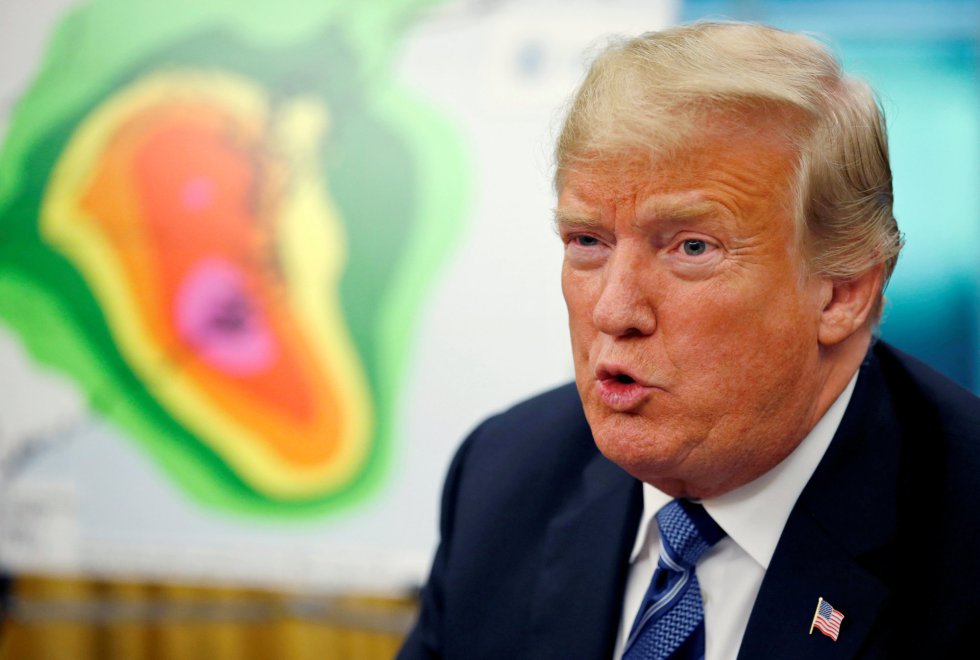 The eye of the storm was expected to pass between Bermuda and the Bahamas on Wednesday and arrive at the Carolina coast by Friday. Tropical storm-force winds, extending 175 miles from the center, were expected to arrive on land by Thursday morning, giving more than a million people scarce time at that point to evacuate.

Here are the latest developments:

• The major power supplier for North and South Carolina, Duke Energy, said that the storm could knock out power for up to three million customers across the two states and that it could take several weeks to restore electricity. The estimate is based on modeling from previous storms as well as Hurricane Florence’s projected path. That number would be about 75 percent of the company’s more than 4 million customers in North and South Carolina.

• The storm was predicted to slow and the eye could stall just offshore, lapping the coast with high waves and dropping more than 20 inches of rain in flood-prone coastal areas.

• The center of the storm was in the Atlantic Ocean about 435 miles from Wilmington, N.C., on Wednesday morning. It was forecast to crawl inland from Friday and into Saturday morning, drenching areas far from the coast as the storm butts against the Appalachian and Smoky Mountains.

The storm’s maximum sustained winds had eased slightly to 125 miles an hour, and forecasters said that its strength would fluctuate in the hours ahead. (Here’s a guide on how the different categories of storms are classified.)

• In addition to powerful winds, a huge, “life-threatening storm surge” is highly likely on the low-lying coasts of North and South Carolina, the National Hurricane Center has predicted.

• Once it is ashore, Florence’s drenching rains may cause “catastrophic flash flooding and significant river flooding” over a wide area of the Carolinas and the Mid-Atlantic states, the hurricane center said. Some spots on the coast could receive as much as 40 inches of rain.

• President Trump promised that the federal government was “ready for the big one.” In a post on Twitter, Mr. Trump once again boasted about the government’s response last year to Hurricane Maria in Puerto Rico, where 3,000 people died. Read more here.

• The governor of Georgia became the latest to declare a state of emergencyahead of Hurricane Florence, joining Maryland, Virginia and North and South Carolina. 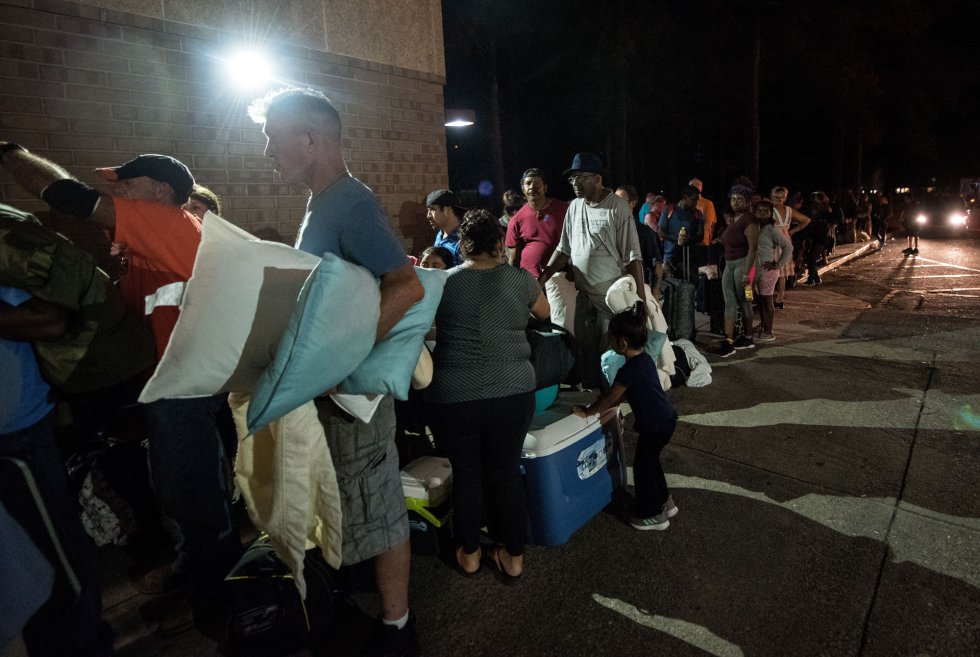 Parts of the Carolinas could experience hurricane-force winds for 24 hours or more, said Jeff Byard, associate administrator for response and recovery at the Federal Emergency Management Agency.

It’s unusual for storms as strong as Florence to barrel straight at the North Carolina coast. The last Category 4 hurricane to do so was Hazel in 1954. That storm was famous for its destructiveness. Most storms that reach the coastal United States tend to track farther south, hitting Florida or entering the Gulf of Mexico.

“This could be an unprecedented disaster for North Carolina,” said Brian McNoldy, a senior research associate at the University of Miami, in a post Tuesday on his popular hurricane blog.

Storms that do follow a path across the Atlantic similar to Florence generally tend to turn north before they reach the coast. This year, though, an atmospheric phenomenon known as a blocking high spun off from the jet stream “like a swirl in the river that separates itself from the main flow,” has prevented Florence from making that turn, said Jennifer Francis, a research professor at Rutgers University.

A body of recent research suggests that disruptions to the jet stream — an apparent result of climate change — have weakened the currents that tend to move weather systems, Dr. Francis added. As a result, she said, “we are seeing this tendency for weather patterns to basically get stuck in place in the summertime,” whether it is drought in the West or the drenching summer rains in the Midwest this year.

In Carolina Beach, N.C., an island community south of Wilmington, about 75 percent of the residents had left, according to Michael Cramer, the town manager.

Mr. Cramer said he was worried about projections that Florence would be comparable to Hurricane Hazel, which nearly wiped his town of 6,200 year-round residents off the map in 1954. It destroyed 362 buildings there.

The coastline that Florence will plow into this week is, if anything, even more vulnerable. Americans have flocked to the nation’s shores and built extensively in recent decades, ensuring that any modern storm will damage much more property than those of previous generations.

The trend has also put many more people directly in harm’s way. In 2010, 123 million people, or 39 percent of Americans, lived in counties directly on the shoreline. That’s a 40 percent increase since 1970. The 2020 census is expected to show that figure growing by 10 million people. 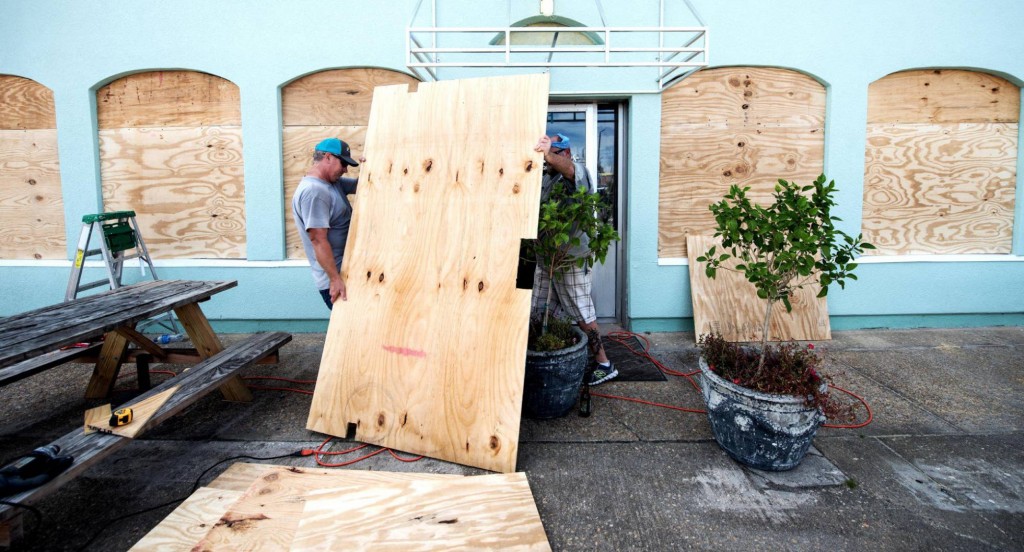 That growth has occurred as climate change has made the coasts more vulnerable. Gabriel Vecchi, a climate scientist at Princeton University, noted that a rising sea level adds to the destructiveness of storm surges, and a warming atmosphere holds more moisture, leading to more rain.

“Right now, I would focus on everybody getting safe, and away from Florence,” Dr. Vecchi said. “But afterward, there’s other questions that need to be asked.”

As Hurricane Florence stared down at the Carolina coast, many residents were making last-minute decisions about whether to evacuate or ride the storm out.

In Carolina Beach, N.C., which sits on an exposed barrier island, Mike Patel is selling almost everything in his grocery store at half-price.

Many customers at the Sea Merchants grocery live from paycheck to paycheck, he said, and cannot afford to evacuate. Some are short of cash after paying for back-to-school items.

“Some of these people are suffering,” he said. “A hurricane is not the time to make things worse for them.”

“It’s like a family here – their pain is my pain,” Mr. Patel said as he ran the register Wednesday for customers buying water, bread, ice, sodas, canned food and charcoal as stiff winds whipped waves on a beach a few blocks away.

In Nags Head, N.C., the mayor, Ben Cahoon, said he and his wife had decided to stay despite mandatory evacuation orders — one from the state and one locally that he helped put in place.

“There are folks like myself, who have lived here a long time, who sort of have a sense about these things,” he said of Nags Head, a small beach town in the Outer Banks. “Whether that’s entirely rational or not, that’s something else.”

Mr. Cahoon, 56, said he is staying for both personal and professional reasons — a desire to be home to be available in case he can help.

“We don’t really strong-arm people to get out,” he said, “but we want them to understand the risks they are taking by staying.”

Farther inland, residents who remembered the flooding from Hurricane Matthew in 2016 and Hurricane Hugo in 1989 were hoping to avoid a third catastrophe.

“We are actually moving stuff as much as we can out of the house,” said Regina Cobb, 50, of Princeville, the nation’s oldest town established by African-Americans, residents. “The town hasn’t recovered from the last time. There are still a lot of people who haven’t moved back home.”

“If it floods this time, I think my family is out,” she said. “We’ve been discussing this the past couple of days. This is God’s way of saying: ‘It’s time to do something different.’”

As Hurricane Florence continued to threaten the Carolinas, the National Weather Service also projected that Tropical Storm Isaac would move over the Lesser Antilles islands and across the Caribbean Sea through the weekend, bringing up to four inches of rain to Puerto Rico and the United States Virgin Islands that could cause flash-flooding.

In the Pacific, Tropical Storm Olivia is expected to move across the Hawaiian islands, especially Maui and Oahu, bringing up to 15 inches of rain and the possibility of “life-threatening” flash flooding through Thursday. The Weather Service warned of high surf and wind gusts that could knock out power and rip off tree limbs.

Forecasters and public officials will try just about anything to get residents to flee coastlines ahead of a hurricane. Last year, as Hurricane Harvey barreled toward the Gulf Coast, the mayor pro tem of Rockport, Tex., said people who insisted on staying should “mark their arm with a Sharpie pen — put their Social Security number on it and their name.”

Fearing that Hurricane Florence could also be deadly, the governors of the Carolinas and Virginia ordered evacuations this week in many coastal counties.

The storm “will affect each and every one of you,” said Gov. Roy Cooper of North Carolina on Tuesday, as he ordered what he believed was the first state-mandated evacuation of the state’s barrier islands. “The waves and the wind this storm may bring is nothing like you’ve ever seen.

But experts know that not all residents will heed the warnings, and some say part of the reason is that storm forecasts and risks are inadequately communicated to the public. Here are some common misconceptions, and recommendations for how forecasts could be improved to remedy them.