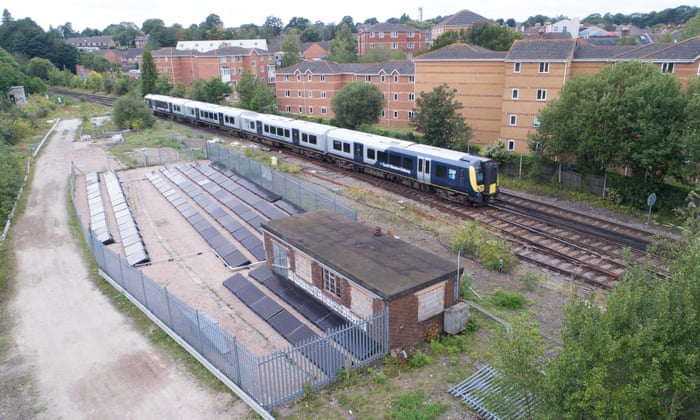 It's over: those three sweet days of record-breaking British bank holiday sunshine — spent by many on gridlocked, panicked motorways enroute to mini-breaks.

And while trapped on a sweaty M4 with the windows rolled down, many of us might also have been thinking how much easier our lives could be if we just had solar-powered trains.

A pilot scheme developed by Imperial College London and environmental group 10:10 Climate Action has built 100 solar panels by the railroad tracks of Network Rail’s route through Wessex, which will power all lights and signalling.

And that's just the start. The Guardian reports that the plan is to directly power the trains on that route as early as next year, while Network Rail wants to roll it out on lines all over the country.

“We have ambitions to roll this technology out further across the network should this demonstrator project prove successful, so we can deliver a greener, better railway for our passengers and the wider public,” said Stuart Kistruck, director for Network Rail’s Wessex route.

It’s not the first solar powered train, or the first time solar has been used to fuel the operation of a train system. But it is the first in the world to generate energy from localised solar panels to go directly through to the railway without needing to go via the electricity grid.

That’s important because it could be a more efficient energy source, while supplying cheaper electricity than that from the national grid. Riding Sunbeams, the research team behind the Aldershot project, has said that it can be rolled out to support commuter routes in Britain’s biggest cities too.

It comes as Britain abandoned plans to step away from diesel-run trains in favour of electrified tracks in 2018 after concerns about spiralling costs. The £38 billion programme was announced by former Prime Minister David Cameron in 2012, with hundreds of millions of investment cancelled as recently as last July.

Want something a little more enticing than a UK mini-break? Maybe wait a little until the first electric planes come around — and then head to India.

Global Citizen has previously reported that Indian Railways wants 25% of its energy to be renewable by 2025. The country has everything from solar-powered buses to solar-powered cities — and last year opened its first train station run entirely on solar. It's hoped to be the world’s first 100% “green” railway network by 2030.