Local authorities can bid for money to help pay for a new fleet of electric buses. 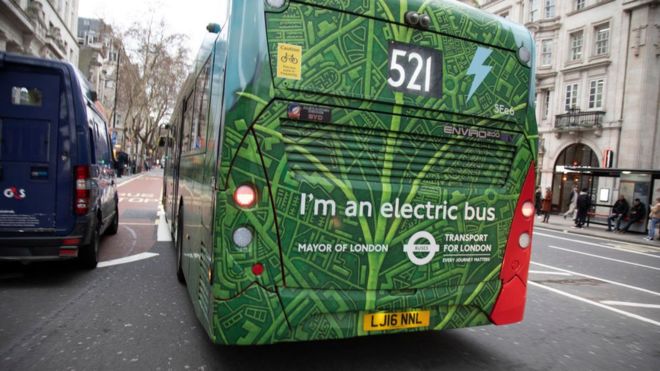 Transport Secretary Grant Shapps said buses had "a crucial role to play in bringing down emissions".

Darren Shirley, head of the Campaign for Better Transport, called it a "good start" after years of cuts to services.

The DfT said that the winning town would be used as a model by government as it aims to ensure all buses are fully electric by 2025.

The announcement comes as part of a wider package of measures for buses.

About £70m will go towards high-frequency "Superbus" networks. One is already in place in Cornwall, where a mix of lower fares, more frequent services and lots of bus lanes has proven successful.

The government is also putting £20m towards trials of on-demand buses, which can be ordered through an app.

Those services are designed for rural or suburban areas where passenger demand doesn't justify having fixed routes permanently in place.

An Uber-style bus service already operates in Oxford and Liverpool.

The scheme, run by Arriva which is working with Merseytravel, allows passengers to determine the route of a minibus by entering their pick-up point and destination on a mobile phone app.

However, Oxford Bus Company recently warned that its PickMeUp service "may end" unless it finds additional funding.

Despite making 250,000 journeys since the service was launched in June 2018, Oxford Bus Company said "it is still challenging to operate on a fully commercial basis".

The transport secretary said: "With 200 electric buses able to offset 3,700 diesel cars, it is clear they have a crucial role to play in bringing down emissions."

Mr Shapps added: "This £170m package will help us to create communities which are cleaner, easier to get around and more environmentally friendly, speeding up journeys and making them more reliable."

About £30m of funding will go to English local authorities outside of London in 2020, to help them improve or restore bus services that have been cut.

Over the last decade, council funding for buses in England has fallen by more than 40%. That figure excludes the capital, which has bucked the trend.

The Campaign for Better Transport's chief executive, Darren Shirley, told the BBC that the proposals were a "good start".

He said: "For years, we've seen services cut and reduced, with commuters unable to get to work or to see their families.

"To reinstate some bus services and introduce zero emissions buses for one town is a good start for this government."

A 2019 study by the campaign group found that more than 3,000 local bus routes had been lost or reduced over the previous decade.

It also called for discounted fares for concessions such as students and elderly people.