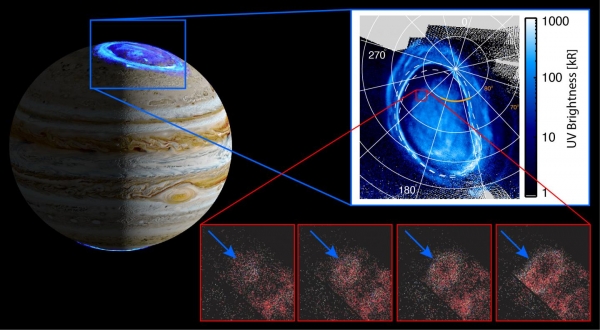 “We think these newly discovered faint ultraviolet features originate millions of miles away from Jupiter, near the Jovian magnetosphere’s boundary with the solar wind,” said Dr. Vincent Hue, lead author of a paper accepted by the Journal of Geophysical Research: Space Physics. “The solar wind is a supersonic stream of charged particles emitted by the Sun. When they reach Jupiter, they interact with its magnetosphere in a way that is still not well understood.”

“Despite decades of observations from Earth combined with numerous in-situ spacecraft measurements, scientists still do not fully understand the role the solar wind plays in moderating Jupiter’s auroral emissions,” said SwRI’s Dr. Thomas Greathouse, a co-author on this study. “Jupiter’s magnetospheric dynamics, the motion of charged particles within its magnetosphere, is largely controlled by Jupiter’s 10-hour rotation, the fastest in the solar system. The solar wind’s role is still debated.”