Piping plover breeding groups in the Northern Great Plains are notably connected through movements between habitats and show lower reproductive rates than previously thought, according to a new U.S. Geological Survey study. 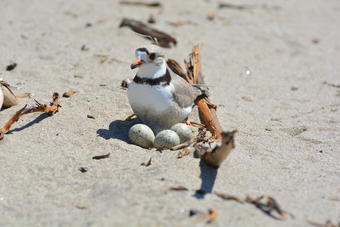 These new findings point to a need for further studies and suggest the species may show a higher extinction risk than currently presumed.

Piping plovers are small-bodied, short-distance migratory shorebirds. The Northern Great Plains population has been listed as a threatened species under the U.S. Endangered Species Act since 1985. Previously, wildlife managers had assumed four separate breeding groups within the Northern Great Plains and that individuals from these groups moved infrequently between habitats. Earlier studies based on this assumption resulted in a low extinction risk for the species.

Scientists analyzed movement, survival and renesting rates in two of the assumed breeding groups of piping plovers over four distinct management units along the Missouri River and alkaline wetlands distributed throughout the prairie pothole region from 2014 – 2019. Piping plover reproductive rates were studied between 2014 – 2016. The study areas are within North Dakota, South Dakota and Montana and include the U.S. alkali wetlands, Lake Sakakawea, the Garrison Reach of the Missouri River, and Lake Oahe.

Results show river and alkali wetland habitats appear to be of higher quality than reservoir habitats, which had lower annual survival, increased movement away from the habitat, lower renesting success, and lower reproductive output.